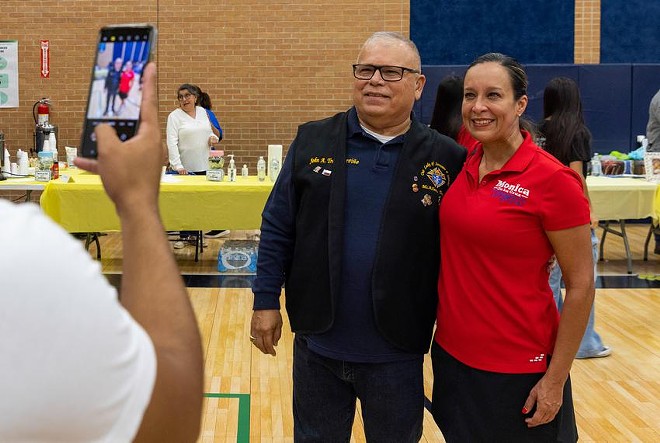 She’s the latest to join the growing list of Republican candidates and members of Congress who have recently come under fire for touting the benefits of Democratic or bipartisan legislation that they had disparaged and voted against. De La Cruz told the Texas Tribune she has always supported the kinds of assistance programs her businesses benefited from, but she vocally opposed major legislation that would have expanded them, saying they included wasteful spending items.

De La Cruz also co-owned Navi Business Group with her then-husband, reporting $36,000 in spousal income in 2020. The firm received $4,000 in an Economic Injury Disaster Grant in April 2020 and a $98,000 Economic Injury Disaster Loan in May of that year. De La Cruz and her husband have since separated in a bitter divorce involving allegations against her of abusive behavior toward his daughter. De La Cruz rejected the allegations.

Another of De La Cruz’s businesses, DLC Insurance, was approved for a $38,552 Paycheck Protection Program loan back on April 29, 2020, intended to support five jobs at the firm. But the firm was ultimately shuttered during the pandemic, according to a March report from NBC News. De La Cruz, who listed her title as president of the company on disclosure forms, reported making $44,600 in income from DLC Insurance that year. The PPP loan was forgiven, including interest.

Calls by the Texas Tribune to a number listed with her insurance agency went unanswered.

On her campaign website, De La Cruz runs on a platform of stopping “incentivizing able-bodied adults not to work,” implementing “universal and enforceable work requirements for welfare” and working “with companies to transition people from welfare to work to address our labor shortage.” She also opposes Democratic social spending legislation, citing concerns it drives up inflation.

The PPP was one of the key relief elements of the CARES Act, a behemoth pandemic response package signed by former President Donald Trump in March 2020 as millions of Americans stopped going to work in person. Trump signed another COVID-19 relief package in December of that year, which De La Cruz criticized in a Facebook post and comments as surprising and “very sad.”

“I’m surprised Trump signed this,” she wrote on social media posts, criticizing the aspects of the bill that allocated funding for other countries.

“Monica De La Cruz raged against relief funding for Texas small businesses, but what she didn’t mention was that she and her family happily took nearly $200,000 of that same aid for themselves. Her hypocritical agenda of ‘Help for me, but not for thee’ is politics at its worst and South Texans deserve better,” said Monica Robinson, a spokesperson for the Democratic Congressional Campaign Committee.

De La Cruz retorted to the Tribune that such claims are "nothing more than another desperate attempt by the far Left to smear me."

"Like many others, my small business received PPP loans to help us stay open and afloat during the pandemic. I’ve always supported programs like that to help small businesses, while also pointing out that the Democrat’s so-called American Rescue spending bill wasted far too much taxpayer money on unnecessary items and caused higher inflation,” she said.

In the early days of the pandemic, De La Cruz was running against U.S. Rep. Vicente Gonzalez in Congressional District 15, ultimately losing in a close race to the moderate member. This year, she faces progressive newcomer and fellow small businesswoman Michelle Vallejo, who runs on a progressive populist platform and has also encountered her own financial scrutiny after neglecting to declare more than $200,000 in assets on her financial disclosure report, CQ Roll Call reported last month. Vallejo’s campaign submitted an amended disclosure accounting for information “inadvertently left off the original filing,” her campaign spokesperson told CQ Roll Call.

The CD-15 race is the most competitive in Texas, with no incumbent after Gonzalez opted to run in the newly reshaped 34th congressional district, previously held by Rep. Filemon Vela. National Republicans have also been pouring money into South Texas to flip the historically Democratic region, touching on the area’s border proximity and its religious and social conservatism.

Disclosure: The Texas Tribune, as a nonprofit local newsroom and a small business, applied for and received a loan through the Paycheck Protection Program in the amount of $1,116,626.