Dirty words other than lethal injection

Today, I was a special guest (i.e. not on the program, but scheduled myself in anyway) at the Alternative Spring Break, persented annually by the Texas Students Against the Death Penalty. I'm blogging from Austin. I probably should've mentioned it to y'all earlier, given our avid readers in Austin a heads up, but seeing as those avid Austin readers don't exist (yet) .... well, OK, I kinda forgot. Sorry.

Anyhow ... the Alternative Spring Break is a week of anti-death-penalty activism training for high school and college students. They came from all over the country, and MTV is supposedly following it, as are the ACLU Freedom Files producers.

I was inserted into the last 15 minutes of a "Youth Media Training" seminar led by a Campus Progress representative named Pedro. Mostly, he taught them how to write media alerts for their rallies, panels, and other public events. I was supposed to fill them in on the journalist's side of things. I'd planned on telling them about the Bocharski case (Arizona Supreme Court decision: pdf), and how I first found myself covering death row ... but then I realized that would take my entire slot and half of the next, which featured Bryan McCann, coach of UT's champion debate team. 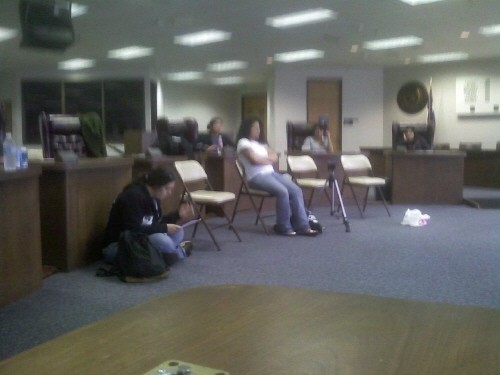 This a photo from before it started. There were 14 of them, all lazing back in the comfy leather chairs usually filled by State Board of Education asses. You can see the vote-board in the back, and on each of our desks sat an aye/nay/abstain button-box. When my turn came up, I went with what I thought were the most important bits; how the alt-newsweekly cycle works, that you need to get calendar items to Nicole (email) two weeks in advance, and so forth.  After that, I talked about using Myspace to contact the families and friends of death-row inmates, and that would've been what stuck with them -- Wow! Journalists use Myspace too? --  but then the big indie rock kid with the glasses raised his hand. He was one of the stragglers, so he's not in this picture. He was sitting in that first empty chair on the left.

He asked what kind of control/freedom I have over my work?

My response ... I didn't talke about about ethics, or responsibility, or free speech, or the wall between editorial advertising. The first thing that came to mind and out my mouth: "This last week, the words vagina, twat, cunt and bald pussy made it into our copy."

As soon as I said it, I heard the sucking in of air. That's when I remembered a few of them were high-school students. Completely inappropriate? Nah ...  they're anti-death penalty kids. They'll need to learn how not to flinch

Next, I called on the dreadlocked girl in the front row (also not in the picture), who asked politely, if I could explain how they were used. I explained that I described Colin Farrell as "that fucking irish cunt" in the crossword (that was a giveaway). And then I quoted the Queque's vocabulary as evidenced by this week's tired rant on 210SA's euphemism, "in between down there."

And that's probably what they'll remember ... well, some of them at least. I think I convinced two San Antonio high schoolers to start writing letters to the editor. I'll settle for comments on the blog. Hooman took a copy of the Bocharski decision that I'd brought. All in all, it went OK, and I'll do better at my upcoming lecture at Texas Intercollegiate Press Association convention. At least I'll know what not to bring up.

It was also successful on the newsgathering front: I got some background on the two anti-death-penalty artworks removed by Rep. Borris Miles. But I think I'll sit on that for a bit.