The plates on Cantu's car did not match the vehicle that the teen was driving, records also show, according to a KSAT report. 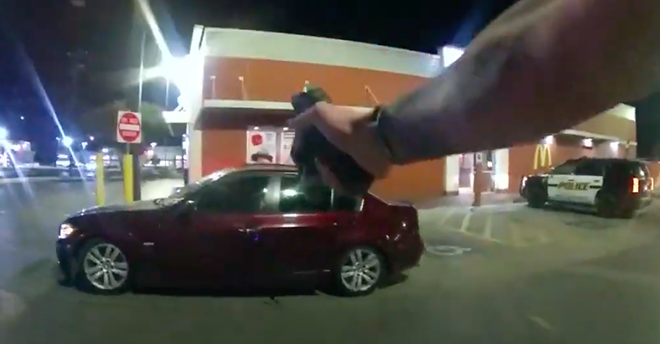 Cantu on Oct. 1 sped away from then-officer James Brennand in the same maroon BMW the teen was in when he was shot the following night in a McDonald's parking lot, the station reports, citing the documents.

That shooting transpired after Brennand approached the car while on unrelated call, saying he'd tried to stop the vehicle the night before. Brennand, who fired 10 shots at the vehicle, striking Cantu multiple times, has since been fired and now faces two felony charges of aggravated assault by a public servant.

During the alleged incident the night before the shooting, Cantu accelerated the BMW when Brennand turned on his emergency lights to pull him over, KSAT reports, citing police records. Then teen then reportedly took an onramp for U.S. Highway 281 near Bitters Road.

The woman who was in the car with Cantu, identified in police records as Cantu's girlfriend, confirmed to investigators that Cantu was driving the car that sped away from Brennand on Oct. 1, according to KSAT.

The Oct. 1 incident left Cantu's girlfriend startled, and she was hesitant to get in the car with him the next night for fear they might be arrested or "shot at," KSAT reports, citing the records. She eventually relented and joined Cantu in the car on the trip to McDonald's the following night, according to the station.

Cantu remains at University Hospital in critical condition as of Oct. 25.