'SAISD and Garden City Church no longer plan, nor have a formal agreement, to utilize the space at Lamar Elementary,' campus officials said. 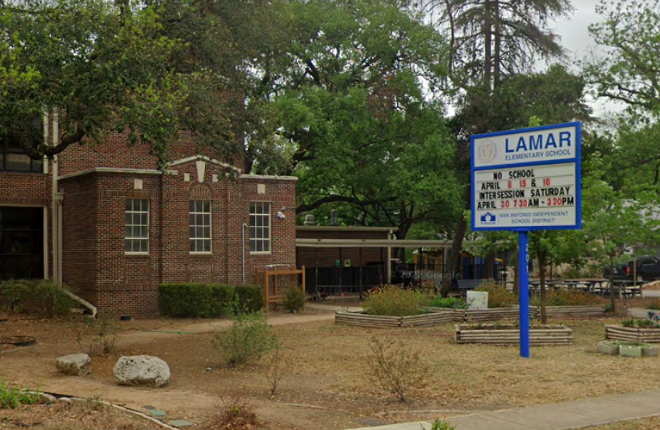 Google Maps
Lamar Elementary School: In an online video, Pastor Carl Young said he wanted the public school to become financially dependent on his church.
After an outcry from residents, an evangelical church has dropped its controversial plan to operate from Lamar Elementary School inside the Mahncke Park neighborhood, campus officials said.


A statement from the public school, shared Friday in the neighborhood's Facebook group, appears to have quelled residents' concerns about Pastor Carl Young's intent to open his Garden City Church inside the school.

Many expressed anger online after video surfaced of Young saying he was "planting" his church in the north-of-downtown neighborhood because its progressive political views — which he likened to a "mini-Austin" — were anti-gospel.

“[San Antonio Independent School District] and Garden City Church no longer plan, nor have a formal agreement, to utilize the space at Lamar Elementary,” according to the school's statement. “After concerns surfaced, Superintendent [Jaime] Aquino and campus leadership began a productive conversation with Pastor Carl Young. He expressed respect for the Lamar Elementary School community, and regret, because it was not his intention to cause the school or district harm. We are pleased to be working on a solution that works for everyone involved and does not involve a campus-based site. At the end of the day, we all want what is best for the community.”

Young approached Mahncke Park residents on Facebook last Sunday, saying he planned a meeting to introduce himself and the church. Shortly after, residents found an hour-long interview on a Christian YouTube channel, in which the pastor said he was drawn to Mahncke Park after seeing yard signs the displaying pro-LGBTQ+ "rainbow colors with each of the five secular creed [sic]."

"Where we're wanting to plant there [in Mahncke Park], there is more of a hostility towards the gospel," Young says in the clip, which was uploaded in February. "Do I want to bring my kids to that, and see some of that? I think God's calling us to do that."

In the video, Young also said he expected the school to become financial dependent on the rent he was paying, and that he wanted to "serve the faculty and students of Lamar however we can outside of Sundays."

"Part of our strategy is to — we think God is calling us to be a generous church, financially," Young said during the interview. "And so, how do we bless the school and the teachers, and the students and the admin — and everything there — to where, in two years, they couldn't imagine us not being there anymore? And so, we want to be able to share the gospel with all of them but we want them to think, 'Man, if they leave, this is gonna go downhill really quickly.'"