News of the alleged scheme follows the weekend arrest of another county law-enforcement official on criminal mischief charges. 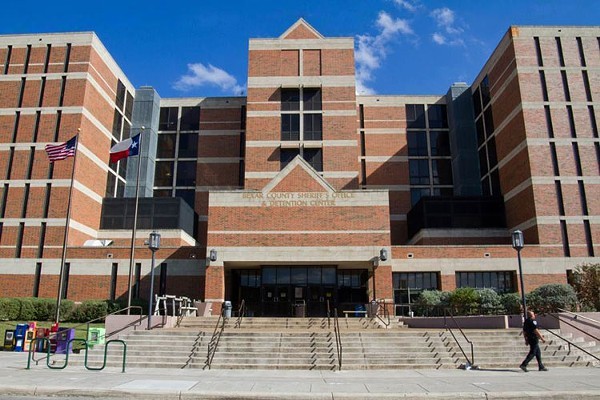 Courtesy of Bexar County
The exterior of the Bexar County Jail as seen from the front.
The Bexar County Sheriff's Office (BCSO) has arrested a former deputy, who now faces charges of smuggling drugs into the jail for an inmate, the Express-News reports.

Mario Sepulveda, 21, was taken into custody Monday on charges of abuse of official capacity between $1,500 and $20,000, a state jail felony, and possession of a controlled substance in a correctional facility, a third-degree felony, according to the daily.

Sheriff Javier Salazar told the Express-News that BCSO officials received a tip in late June that Sepulveda, then a probationary deputy, was sneaking meth and synthetic marijuana to an inmate.

Investigators accessed phone conversations between the inmate and a woman on the outside, revealing that the woman gave drugs to Sepulveda, who then passed them to the inmate, Salazar also told the newspaper. In turn, the probationary deputy would receive payment through an online app, the sheriff added.

Investigators found synthetic weed in the inmate's cell, Salazar told the Express-News, and officials on July 18 confronted Sepulveda at work. A search of the probationary deputy's vehicle turned up corroborating evidence as well as evidence linking him to another inmate, the sheriff said.

“Since he had already shown a propensity to interact with inmates, and he was still a probationary deputy, I terminated him that evening,” Salazar told the Express-News.

News of the alleged smuggling scheme follows the Saturday arrest of an off-duty Bexar County sheriff's corporal on a misdemeanor criminal mischief charge, according to a separate Express-News report.

Cpl. Adelina Agosto, 41, is accused of “drunkenly destroying” the door of a residence when the person inside didn't open it, according to a BCSO statement cited by the daily.