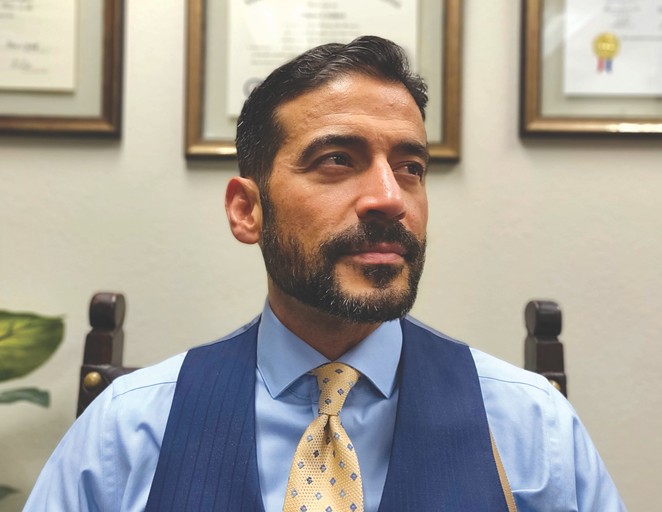 I’m sitting across from Nicholas “Nico” LaHood on the fifth floor of the swanky Mercantile Building, the location of his new practice, LaHood Norton Law Group. He settled into his new digs immediately after completing his single, four-year term as Bexar County district attorney on January 1.

“Getting back to civilian life has been challenging, but neat,” he says, adding that he’s grateful for the opportunity to spend more time with his family.

LaHood’s tenure as DA represented a glitzier chapter in Bexar County history. Armed with an endorsement from actress Eva Longoria Baston, he won a 2014 election that ousted 16-year incumbent Susan Reed. Once in office, he was criticized for an impassioned — some would say bombastic — style that made him an easy target for a primary challenge from fellow Democrat Joe Gonzales.

The controversy surrounding LaHood hasn’t exactly diminished since his retreat from political life. His boutique firm has been in the spotlight for representing criminal defendant Michael Stovall, a man who was indicted on a felony charge while LaHood was still in office. That case is pending in the Texas Court of Criminal Appeals.

“I’m a shitty politician, [but] I think I’m a damn good public servant,” LaHood says of his time in office. “What I’d like to believe is that people always got the authentic Nico.”

Being authentic meant being transparent about his past during campaigns.
LaHood went through the justice system in 1994, after he was arrested for selling 200 ecstasy pills to an undercover officer. He received deferred adjudication, a form of probation. Two years later, his brother Michael was murdered in his parents’ driveway.

“At the time my brother needed me the most, I wasn’t there for him,” he laments, following a deep sigh. “Oh, that weighed on me for years, Papa. [And] I never hugged my older brother. I never told him that I loved him. I was too [caught up in] machismo. ‘Guys don’t do that shit.’ It’s [been] the detoxification of my mind over the years. But you live and learn, my brother.”

When asked to describe the past six years of his life, he replies rather quickly: “Purposeful, but it sucked.”

I ask him how it sucked.

The “purposeful” part is the positive effect he feels he, as DA, had on people’s lives.

The night of his March 2018 primary loss to Gonzales, LaHood decided to come home early, regardless of the outcome. He remembers his daughter, then 5, saying, “Hey, Papi, what are you doing here?”

Ultimately, he lost his seat to Gonzales, who ran as a criminal justice reformer and whose campaign was funded, in part, by philanthropist George Soros.

Although LaHood expects to return to politics, he assures me that when he does, it won’t be an emotional decision. In fact, when Precinct 3 Bexar County Commissioner Kevin Wolff chose not to run for re-election, LaHood says a number of people encouraged him to run for the seat.

“On paper it made sense,” he says. “It just wasn’t the right time.”

LaHood and his wife, Davida, have four children. Their second-oldest, Michael, is on the spectrum of autism. LaHood shows me a heartbreaking video of his son having a meltdown.

“Autism is a huge part of our life, but we have worked on not making it our life,” he says.

LaHood informs me that parents caring for children on the spectrum have an 85% divorce rate.

“Spouses take it out on [each other],” he says. “The other kids are ignored. Financially, there are things that insurance doesn’t cover.”

“I have the bite marks. I have the battle scars of raising a child on the spectrum. [But] my son is a joy, brother. He has taught me patience that I was not born with,” he says.

“As the man who’s been entrusted to be the earthly daddy for my boy, I’m going to talk for my son. I’m going to be a lawyer for my son,” he says with calm determination. “In 2020, I’ll be focusing on Michael to help him grow and reach his God-given potential.”

For the past 10 years, LaHood has been running a weekly men’s Bible study, which inspired his podcast R-Rated Christianity. The podcast premiered in May and is co-hosted by Saulo Rodriguez, the conservative creative behind The BrockCast, a fiery podcast hosted by former San Antonio City Councilman Greg Brockhouse.

While R-Rated Christianity is a platform for LaHood’s Christian worldview, he wants it to be unfiltered. The “R” stands for raw, real and redemptive.

“Raw is how we talk,” he explains. “Real, because we’re not bullshittin’ around, and ultimately, [we want to] lead you to a place of redemption.”

When some warned him against the name, saying it would offend too many Christians, LaHood responded, “Then it’s the right name.”

To those who have followed his career, it was an unsurprising reply.

“What are the two things you’re not supposed to talk about in public?” he asks rhetorically. “Religion and politics.”