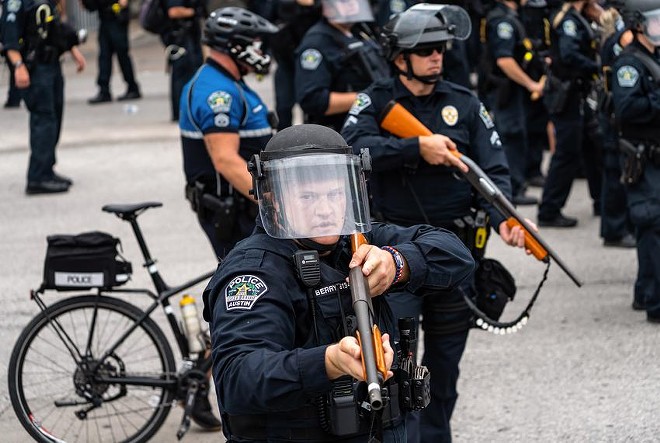 Texas Tribune / Jordan Vonderhaar
Austin police officer Justin Berry holds a weapon with so-called less-lethal rounds during a protest in front of Austin City Hall on May 31, 2020. The protesters gathered in response to the murder of George Floyd by a Minneapolis police officer.
Gov. Greg Abbott has appointed an indicted Austin police officer accused of using excessive force during 2020 protests to Texas’ regulatory law enforcement agency.

Justin Berry was among 19 Austin police officers indicted earlier this year in the protests spurred by the murder of George Floyd by a Minneapolis police officer. Berry is charged with two counts of aggravated assault by a public servant.

He also ran as a Republican for Texas House District 19 but lost in the primary runoff election this year. Abbott had endorsed Berry in the race, saying his “strong conservative values and experience stopping violent crime are exactly what we need in the Texas House.”

Now, at the governor’s hand, Berry will serve on the Texas Commission on Law Enforcement, which sets minimum licensing and training standards for police. Abbott did not immediately respond to the Texas Tribune's request for comment, but in a press release announcing Berry’s appointment Friday, he said the commission ensures “that the people of Texas are served by highly trained and ethical law enforcement, corrections, and telecommunications personnel.” Berry posted a statement to Twitter on Friday but did not respond to requests for comment.

“The demands and expectations of today’s professional police officer have never been so great,” Berry said about his appointment via Twitter. “I look forward to ensuring Texas has the best police officers in the world. Ensuring those who answer the call to serve their respective communities have the training and resources necessary to be set up for success are a priority to not only keeping Texan’s safe but ensuring trust is earned and maintained by those very communities.”

Sara Mokuria, co-founder of Mothers Against Police Brutality, said Abbott’s decision to appoint Berry to TCOLE is dangerous, not based in public safety and flies in the face of “what’s in the best interests of Texans.”

“This is an indicted officer who is now part of the body licensing and regulating law enforcement agencies,” Mokuria said. “It’s a move in the wrong direction, and it makes us unsafe. And, quite frankly, it’s a message that has been reiterated from the governor’s mansion over and over again, whether that be families in Uvalde who were not safe to send their kids to school, or all Texas residents during the winter storm. Our lives and our safety have consistently been put at risk because of this governor.”

Berry’s exact role in the Floyd protests is unclear, but Austin officers grievously wounded several people after shooting them with “less-lethal” ammunition in the head. That included a 20-year-old Black man police said was not their intended target after a man nearby tossed a water bottle and backpack up toward steps where police were in formation. Video also showed a 16-year-old Hispanic boy collapsing to the ground after police fired a beanbag bullet at him while he was standing alone near the freeway.

The violent police tactics during the protests against police violence were heavily criticized. Along with the indictments of 19 officers, the city of Austin agreed to a $10 million civil settlement with two men shot by police with beanbag rounds, including the 20-year-old.

Chas Moore, executive director of the Austin Justice Coalition, said Abbott appointing Berry despite his indictment “isn’t surprising.” Moore feels the governor said all of the politically correct things after Floyd’s murder but followed up with inaction.

“He’s never cared about making sure that everybody can be safe,” the activist said. “He doesn’t care about the national conversation that happened in 2020, where every state had some form of protest for George Floyd and Breonna Taylor, you know. He’s a diehard Texas Republican.”

Eleanor Klibanoff contributed to this story.