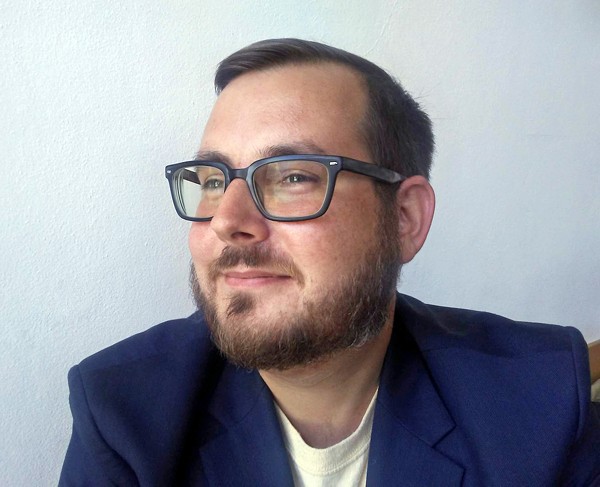 I’m sitting across from H. Drew Galloway at Estate Coffee Shop on the city’s East Side. As the executive director of MOVE Texas, a nonpartisan nonprofit dedicated to civic education and leadership development, Galloway sees his work “as giving young people a voice in our democracy.”

When he says “young people,” he is usually referring to millennials, the folks who fall between the ages of 18 to 35.  He compares his job to turning the knobs on a radio. “We’re not here to, like, change the channel,” he says. “We’re here to turn up the volume.”

Galloway is hopeful that November’s election will be “a pivotal moment” for his generation. “This is our time to get involved,” he says.

At 36, Galloway describes himself as an “older millennial” and feels he can still relate to the younger people that MOVE Texas aims to serve. If it wasn’t for the gray on the edges of his beard, one would think he was still in his twenties. He believes the time has come for candidates, politicians to “listen and learn” from young adults.

Galloway grew up on a farm in Thomson, Georgia. In 2000, he graduated high school with a passion to study wine. Too young to enter culinary school, he moved to London to get a head start on his chosen field. During his two years in Europe, he traveled to vineyards in Spain, Italy and France before beginning his formal training period at the Culinary Institute of America in Hyde Park, New York. After graduation, he found success on the retail side of the wine business. A job with Spec’s brought him to San Antonio in 2011.

He was almost immediately drawn to local politics, starting with his support of the city’s non-discrimination ordinance. As Galloway got involved, he met then-Councilman Diego Bernal, who approached him and asked how the ordinance would affect him. “I told him I’m a gay father, and [that] I can be kicked out of my house – that’s why I believe in this. He listened to me,” Galloway says.

Galloway then threw himself into the “millennial hustle.” While holding down his full-time job, he went back to school to study public administration at UTSA and interned for then-County Commissioner Tommy Adkisson.

One day, Galloway confided in Adkisson about how he felt that he’d “wasted” over eight years in retail and wished he’d discovered politics sooner.

“[Adkisson] looked at me and said, ‘All politics is retail.’ The commissioner compared the two professions. ‘You have to go door to door to get elected. You have to talk to people and, in some ways, you’re trying to sell a product to them. You’re selling ideas. You’re serving the needs of the person in front of you. [Sometimes], you have angry customers so you’re defusing situations and figuring out a way to solve [problems].’”

Galloway immediately applied this philosophy to community organizing.
After an internship with then-Councilman Ron Nirenberg and a semester working at the White House, Galloway accepted the position as executive director of MOVE Texas in 2016, completing a six-person team.

MOVE is an acronym for Mobilize, Organize, Vote, Empower and is a “voting-rights organization at its core.” In his first year on the job, the organization registered 8,568 people to vote through face-to-face conversations. Galloway saw an opportunity to keep the momentum going with a “healthy impatience.”

He notes that MOVE Texas has to work harder than other “grown-up organizations” in an effort to prove itself. “The day after the election isn’t the day that we should say, ‘Oh, we should have blocked walked [that area],’” he says.

The political landscape has evolved with velocity, and millennials seem increasingly difficult to ignore. The strategy is “targeting the non-voter,” with a pointed emphasis on young people, women, people of color and the LGBTQIA community. “Those are our people,” Galloway says. “Our people [are those] who don’t believe their vote matters.”

Galloway has also learned more about the Latino community. “The impact of a series of federal decisions has created a tremendous amount of fear in the Latino community, especially here in Texas,” he says. “I think it started with the [Trump Administration’s] travel ban. It went to DACA being endangered. Then it went to family detention.”

An example of MOVE’s approach to thinking outside the taco shell: Galloway believes DACA students can have a powerful voice even though they can’t vote. “They just have to exercise it in a completely different way,” he says energetically. “We show them ways to organize on their campus and in their community, outside of the electoral system.”

MOVE relies on “deep canvassing” to reach potential voters, Galloway explains. “When you approach someone on a campus or at their doorstep, you ask them, ‘What is keeping you up a night? What would you like to see changed in your neighborhood?’ And then we just listen,” he says. “That’s deep canvassing. It’s emotionally harder. It takes longer.”

But it gets results.

Galloway believes the best messenger for getting young people to vote is other young people. “If you get somebody who shows up at your doorstep who looks like you, who goes to your same school, that has the same cultural experience that you do, then you’re gonna listen to them,” he says. “That’s authenticity.”

Galloway has been with his partner, Martin, since 2011. He has two sons, ages 12 and 14, from a previous marriage. “I’m a gay dad in the city with the largest number of gay families in the United States.”

“We have to create moments that capture the attention of the unengaged,” he says. “How do you create this moment where everybody perks up and goes, ‘Whoa! What’s happening there?’ In some ways that’s fighting for issues that young people care about – issues like paid sick time and the Free Speech Coalition.”

A good example of MOVE’s approach was last year’s San Antonio Night Live, a candidate forum where candidates and officeholders took part in a Saturday Night Live-inspired variety show. “Ron Nirenberg sang a cappella and John Courage did this crazy, like, striptease-type thing,” Galloway recalls with a chuckle.

Well, his last name is Courage.

Stripteasing for the common man. Sorry. I’m still thinking about that.

“Our role in civics here is to make sure that candidates and politicians understand that they’ve got to come down to a much more authentic level with us,” he says.

When I ask him to define integrity, he thinks for a moment, then says, “Being true to who you are and to what you say. As a person who was married, and then came out... Now I’m living as a gay man. I think I’ve found that authenticity – that integrity. I grew up in the country in rural Georgia [where] you had to hide that part.”

“The wine business has taught me how to do politics,” he says. “There’s this idea of like, ‘You don’t know anything about politics [so] just stay out of it.’ That’s a very wine industry-thing, too.”

How are wine and politics similar? I ask.

“Well, you have to drink wine to love it. So you have to participate,” he says. “There is a type of wine for everybody, so if you try a wine and say, ‘Oh, this is gross,’ you just have to try another one. And your taste is gonna change. Nobody drinks the same wine all the time.”

But one does have to show up and choose, “red or white, sweet or dry.”

Here’s to election season, I offer.

“Yes,” he says with a youthful, confident smile.

“November is upon us.”