Joaquin Castro Hints That He May Challenge Ted Cruz For U.S. Senate Seat 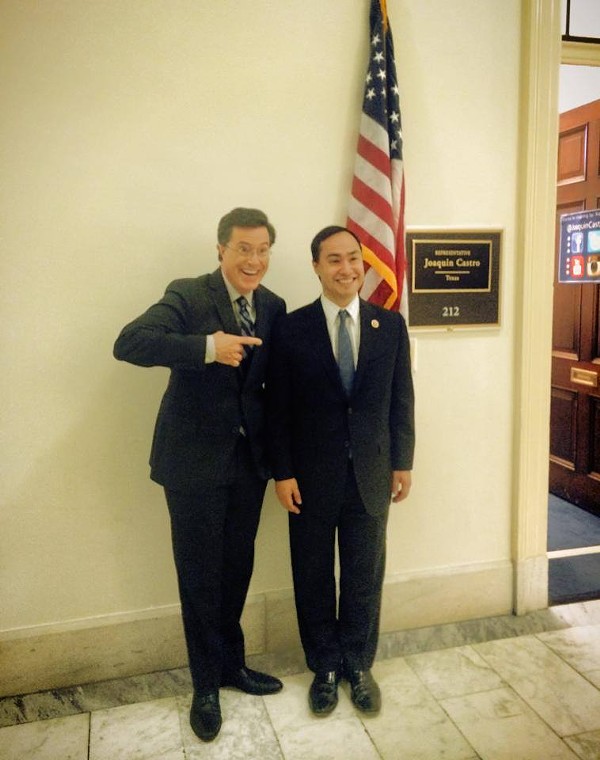 A comment Joaquin made to CBS's Charlie Rose during a Tuesday morning interview with the brothers echoed across the Texas political landscape when Joaquin wouldn't rule out a challenge to Senator Ted Cruz in 2018. Rose had asked the brothers which one would challenge Cruz, to which Julián said "probably zero of us." That's when Joaquin chimed in, saying his brother was speaking for himself. "I'm going to take a look at it in 2018. I'll take a look at that and other opportunities," he said. "I've never been somebody who's said in two years, I absolutely need to run for senate or governor."

Within hours of the interview, Cruz, who took a beating last week at the Republican National Convention after he wouldn't endorse Republican presidential nominee Donald Trump, sent out a fundraising email warning his supporters about the twin South Texas Democrats: "Despite any record of achievement and a liberal ideology out of touch with the majority of Texans, the Castro brothers have the full support of the mainstream media and Washington establishment willing to do everything in their power to turn Texas blue."

Both of the Castro brothers have been involved in politics since the early 2000s and have broad support from Texas Dems so it's no surprise that one of them might want to challenge Cruz. What's different here is that it's usually been Julián at the center of speculation, not Joaquin. Julián rocketed to the national political scene in 2012 when he was the first Latino to keynote the Democratic National Convention. By then, he had two mayoral terms under his belt and would win another in 2013. The following year, President Barack Obama appointed Julián to his cabinet where he serves today as the Secretary of the Department of Housing and Urban Development. Throughout the Democratic primary, his named was repeatedly bounced around as a possible running mate for Hillary Clinton.

As his brother rose a White House Cabinet position, Joaquin was elected to the U.S. House of Representatives 20th congressional district in 2013, after a decade in the Texas House of Representatives. Joaquin initially announced in 2011 that he would challenge nine-term Democrat Lloyd Doggett for the newly created 35th Congressional District, which many said had been gerrymandered to make it harder for the longtime Austin liberal to retain his seat. However, that same year, Congressman Charlie Gonzalez, son of Henry B. Gonzalez, announced that he would retire from representing the 20th Congressional District after holding the seat since 1998. Joaquin decided to run for that seat instead and he's held it since.

Since joining Congress, Joaquin has sponsored 30 bills and co-sponsored 253 pieces of legislation, according to congressional records. He also serves as chief deputy whip, where he works the House floor to count votes. On July 6, House Democratic Leader Nancy Pelosi appointed Joaquin to the powerful House Permanent Select Committee on Intelligence, which requires sound judgment and the ability to keep national secrets. Pelosi said in a press release that she chose Joaquin because of the judgment he displayed while serving on the Armed Services Committee and the House Committee on Foreign Affairs.

And, like his brother, Joaquin has stumped for Clinton throughout the 2016 Democratic primary. However, if either Castro challenges Cruz for his seat in conservative Texas, it's likely to be an uphill slog in a state that hasn't elected a Democrat to statewide office since 1994.