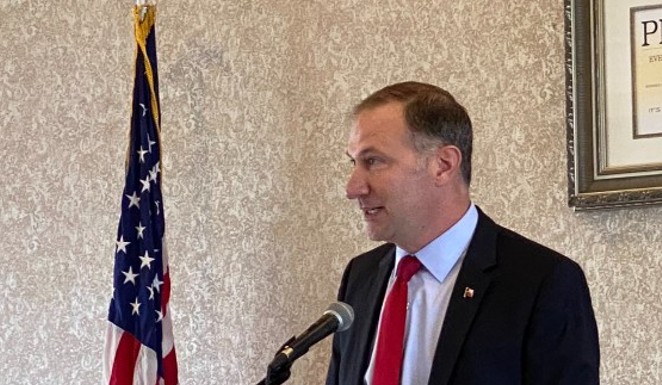 Schwertner gave up his health committee post after the University of Texas at Austin investigated allegations that he sent lewd messages and a sexually explicit photo to a graduate student.

Schwertner, who did not cooperate with UT-Austin investigators, at the time repeatedly denied sending the messages.

The university ended its investigation in December 2018, concluding that while “available evidence [did] not support a finding” against Schwertner, it did not clear him of any wrongdoing.

Soon after the investigation closed, Schwertner told the Senate’s leader he no longer wanted his post as chair of the powerful Health and Human Services Committee. Patrick said in a statement at the time that he had already planned to remove the senator.

According to an executive summary of UT-Austin’s investigation, the messages sent to the student were through an app called Hushed. The app “allows a user to purchase one or more private phone numbers to communicate via cellphone without revealing the user’s actual cell phone number or revealing that a text or call was sent through the Hushed app,” according to the summary.

Schwertner’s lawyers told investigators that the senator had shared the username and password for his LinkedIn and Hushed accounts with a third party, whom Schwertner knew but would not identify. An attorney for the third party communicated with investigators but did not disclose the nature of the party’s relationship with Schwertner or reveal why the messages were sent, the summary says. The summary concluded it was “plausible” the third party had sent the messages.

In the report, the UT-Austin investigator also said it was clear the student had received the unwanted “offensive text messages and photograph” and that “she reasonably believed those came” from Schwertner.

Patrick did not immediately return a request for comment Friday. A spokesperson for Schwertner directed The Texas Tribune to a statement the senator posted to Twitter about his newest assignments. In the tweet, Schwertner said he was “honored by Lt. Gov. @DanPatrick’s trust in my ability to lead this important committee.”

The Senate committee Schwertner will lead is not as prominent as the Senate Committee on Health and Human Services he once oversaw. In 2019, the Committee on Administration handled mostly local issues; designations of honorary days, like designating May 4 as Texas Firefighters Day; and the business of the Senate.

In 2017, after a series of news reports about problems with sexual harassment in the Capitol, Patrick tapped the then-chair of the committee, Sen. Lois Kolkhorst, to review the harassment policies to “make sure they are current and effectively protect every state employee.” The revised policy said complaints of harassment should be directed to the Senate’s human resources office or the secretary of the Senate.

Other changes made by Patrick on Friday include forming two new committees, one on local government and another focused on jurisprudence. The panels will be chaired by Sen. Paul Bettencourt, R-Houston, and Sen. Joan Huffman, R-Houston, respectively.

“No one works harder than the members of the Texas Senate,” Patrick said in a statement. “Their commitment to public service is unparalleled and I am proud to serve with them. They have been working throughout the interim and are hitting the ground running. I look forward to a productive legislative session.”

All but one committee will be chaired by Republicans, who make up 18 of the 31 members of the Senate. Houston Democrat John Whitmire, the Senate longest-serving member, will continue to chair the Senate Committee on Criminal Justice.

“Lucio’s commitment to principle, his past finance committee experience and his long record of service to the people of Texas make him the right senator to take on the budget challenges of the upcoming session,” Patrick said when he first announced the change.

Lucio also won a coveted spot as vice chair of the education committee — another committee likely to be in the spotlight this session after the Legislature’s 2019 passage of a robust school finance package. Sen. Larry Taylor of Friendswood kept his spot as chair of that committee.

None of the newest members of the Senate — Democrats Roland Gutierrez, César Blanco and Sarah Eckhardt and Republican Drew Springer — were named chairs or vice chairs of the various committees.

Sen. Kel Seliger, an Amarillo Republican who has sometimes found himself at odds with the lieutenant governor over his more moderate views, was named vice chair of the Senate Committee on Transportation. During the 2019 legislative session, Seliger lost his longtime position as chair of the Senate Higher Education Committee and even his membership on the committee; he was also taken off the Public Education Committee and the powerful Finance Committee.

Kolkhorst, a Brenham Republican, was again appointed to lead the powerful Health and Human Services Committee. And Sen. Jane Nelson, the upper chamber’s veteran budget writer, kept her post at the top of the Senate Finance Committee.

Alexa Ura contributed to this report.

Disclosure: The University of Texas at Austin has been a financial supporter of The Texas Tribune, a nonprofit, nonpartisan news organization that is funded in part by donations from members, foundations and corporate sponsors. Financial supporters play no role in the Tribune's journalism. Find a complete list of them here.