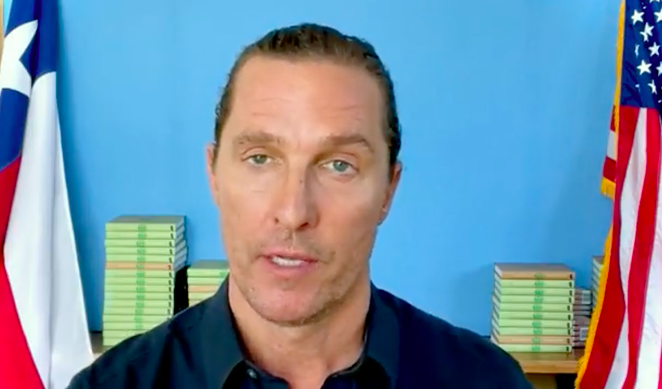 In a video posted on his Twitter account last Sunday, Austin's resident Oscar winner said it was “humbling and inspiring” to consider a run for office. However, "it is also a path that I’m choosing not to take at this moment.”

That decision doesn't make it any clearer where the Dallas Buyer's Club actor stands on issues affecting Texans — or what his lack of a presence will bode for the 2022 election.

While teasing a possible run, McConaughey offered no specific campaign platform other than to declare himself a centrist, declining even to say which party's ticket he might run on. Voting records didn't offer any clues either. To put it politely, they showed him to be only an occasional participant in the electoral process.

As the Current has previously reported, McConaughey largely benefitted in polls from his high name recognition and lack of political baggage.

Meanwhile, Republican Gov. Greg Abbott has drawn the ire of Texas voters for his handling of the pandemic and the February winter storm that left hundreds dead. It's also clear many moderate voters aren't fans of the state's hard-right shift under his watch.

Just as when McConaughey was a possible spoiler in the election, it remains unclear whether his departure will benefit or drag down high-profile Democratic contender Beto O'Rourke. Once again, that comes down to the murkiness of McConaughey's political views.

As he weighed a run, the actor showed himself unwilling to commit when it came to some of the state's biggest issues. During an October podcast, for example, he spoke only in vagaries about two of the Republican-controlled Texas Legislature's two most significant recent actions: a near-complete abortion ban and a sweeping law making it harder to vote.

Little surprise that in a recent University of Texas at Austin-Texas Tribune poll, nearly one in three potential voters had neither a favorable or unfavorable opinion of McConaughey.

Taken today, would that poll substantially change? Likely not.