The sudden TV spending by Coulda Been Worse LLC comes as Abbott battles for a third term against Democratic challenger Beto O’Rourke. 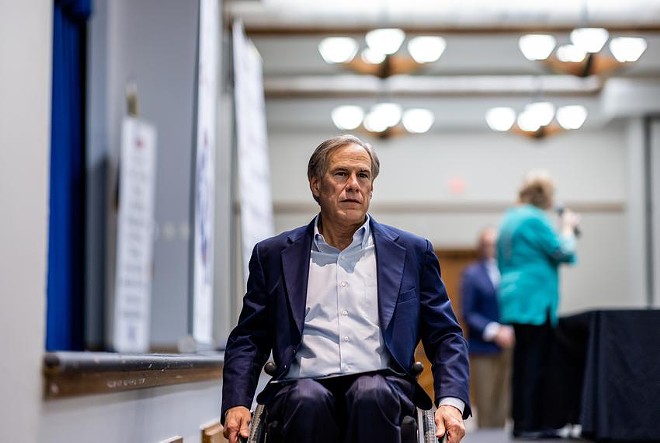 Texas Tribune / Jordan Vonderhaar
Gov. Greg Abbott at a campaign event in Georgetown in January.
A shadowy new group has purchased at least $6 million in TV advertisements ahead of the November election and is airing an ad that targets Gov. Greg Abbott as he runs for reelection.

The minute-long ad from Coulda Been Worse LLC, which started airing Friday, rattles off a list of major calamitous events that have happened on Abbott’s watch, such the Uvalde school shooting and 2021 power-grid collapse. As the narrator speaks, a picture slowly zooms out to show Abbott’s face.

“Any one of these — a terrible shame for Texas,” the narrator says at the end. “All of these — a horrific sign something big is terribly, terribly wrong.”

The spot ends with a clip of Abbott saying after the Uvalde massacre that it “could have been worse,” increasingly a rallying cry of Abbott’s critics. Abbott made the comment while praising the law enforcement response to the shooting, which has since been been widely criticized for taking well over an hour to confront the shooter. Abbott later said he was “misled” when he made the comment.

The advertising represents a significant escalation as Abbott fights for a third term against Democratic challenger Beto O’Rourke. Abbott has led O’Rourke by mid-single digits in polls throughout the summer.

Abbott has also outpaced O’Rourke on the airwaves. Abbott has been airing TV ads for over three weeks, while O’Rourke did not start his first sustained statewide TV buy until Friday.

The news of Coulda Been Worse LLC’s plans got out Thursday when AdImpact, a media-tracking firm, tweeted that the group was scooping up airtime statewide. It ultimately reserved $6.1 million on broadcast and cable TV from Friday through Oct. 9, according to AdImpact.

The name — Coulda Been Worse — signaled that it would be an anti-Abbott effort, but otherwise, few details were known about it, which remained the case Friday.

A group by the same name was registered as an LLC late last month in Delaware, according to records there. Its registered agent is Corporation Service Company in Wilmington. Delaware is notorious for having some of the most lax corporate laws in the nation, allowing people to form corporations there while providing little public information about themselves.

As an LLC, the group is not immediately subject to state requirements to disclose its donors as more traditional political action committees are required to do. The group would have to register with the Texas Ethics Commission — and face the state’s disclosure requirements — if it met the state’s definition of a political committee: “two or more persons acting in concert with a principal purpose of accepting political contributions or making political expenditures.” But whether it meets that definition remains unknown unless the group volunteers more information about itself.

It is unusual, but not unheard of — U.S. Rep. Henry Cuellar, D-Laredo and other Democratic incumbents elsewhere have benefited from TV ads by a corporate entity based in Virginia called Better Jobs Together.

A national campaign finance expert, Brett Kappel, said there is “nothing illegal” about the group’s advertising due to the U.S. Supreme Court’s Citizens United decision, which cleared the way for corporations and other third-party groups to dump unlimited money into elections.

“How dirty can Beto’s scam dark money groups be if they won’t give directly to him?” Abbott strategist Dave Carney tweeted. “Won’t protect him for accountability.”

Asked about the group after a campaign stop Thursday in Lockhart, O’Rourke said he did not “know who this is.’ He said the group, as well as any others like it, should disclose their donors even if they are not required to by law.

“Republicans, Democrats, people across the state of Texas, want to make sure that we know who is seeking to influence the outcomes of elections,” O’Rourke said.