The study also identified eight other Valero refineries as having average benzene emission levels that could harm the health of those with long-term exposure. 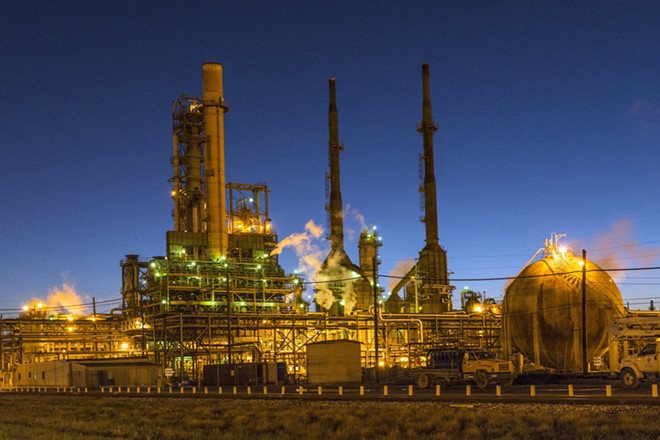 Wikimedia Commons / Library of Congress
Valero's Port Arthur refinery was one of those identified in a new report as having annual average benzene readings over three micrograms per cubic meter.
A Louisiana refinery run by San Antonio-based Valero Energy Corp. was among a dozen that exceeded federal pollution limits for the carcinogenic chemical benzene in 2021, according to a report from the Environmental Integrity Project.

The new study, based on self-reported data to the Environmental Protection Agency, notes that all 12 of those refineries last year surpassed the federally set “action level” threshold of 9 micrograms per cubic meter. Under federal guidelines, polluters are required to take corrective action once they hit that level.

The EPA classifies benzene as a cancer-causing pollutant. A 2020 study from the Journal of the National Cancer Institute found that people living within 10 miles of a Texas oil refinery were “statistically significantly more likely to be diagnosed with lymphoma” than people who lived 20 to 30 miles away.

Officials with Valero, one of the nation' largest petroleum refiners, were unavailable for immediate comment on EIP's report.

The study also identified eight other Valero refineries as having annual average benzene readings that exceeded three micrograms per cubic meter. That's the level California regulators determined that may reduce blood cell counts, harm immune systems and increase vulnerability to disease for people who have long-term exposure, according to EIP's analysis.

“EPA and the oil refining industry really need to do more to crack down on these benzene emissions, because the fenceline concentrations at too many refineries are high enough to pose a potential threat to neighborhoods that are close by,” EIP Executive Director Eric Schaeffer said in an emailed statement. “Fuel prices and refinery profits are up, and these facilities can spend some of that money to better control benzene emissions.”

The nine Valero facilities identified in the report account for the majority of the 15 petroleum refineries the publicly traded company operates. Valero sites that exceeded the three-micrograms-per-cubic meter threshold include both of the company's Corpus Christi refineries, along with Texas facilities in Texas City, Port Arthur, Three Rivers, Sunray and Houston plus one in Memphis, Tennessee.

Valero is the only San Antonio-based refiner identified in EIP's study, and none of the refineries included in the listings are located in the Alamo City.

More than six million U.S. residents live within three miles of a refinery, the study reports, citing EPA data. Those nearby communities have low-income and minority populations at rates nearly twice as high as the general population.