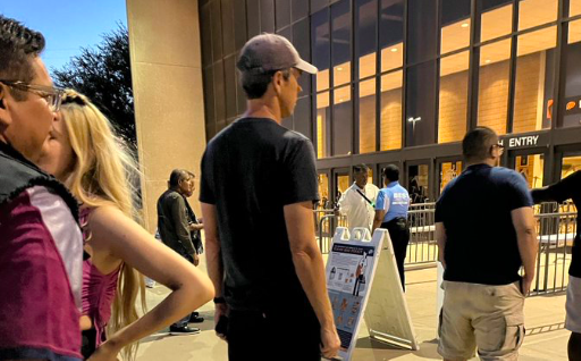 This is the guy, after all, who once played in a punk band with the dude from Mars Volta, was spotted at a 2019 Metallica concert and had a viral video moment air drumming to The Who after one of his debates with U.S. Sen. Ted Cruz.

Turns out the El Paso Democrat is also enough of a rocker that he took a break from his jam-packed campaign schedule catch Iron Maiden when the iconic metal band played his hometown on Sunday.

Or so it appears from a Twitter photograph that purportedly shows O'Rourke lined up to enter El Paso's Don Haskins Center, which played host to Maiden's Legacy of the Beast Tour.

"That’s Beto O’Rourke in line to see Iron Maiden in El Paso. Politics aside, respect," wrote the person who shared the image.

O'Rourke's campaign didn't immediately respond to a request to verify the photo's authenticity.

Just the same, plenty of Twitter users were ready to assume the lanky, baseball cap-sporting politico was queued up to bang his head. Several pointed out his musical past as evidence.


Beto was in a punk band earlier in life.

And Beto has performed on stage with Willie Nelson.

Any way you slice it,

Beto winning Texas is music to my ears.

I saw Beto there at the Don Haskins Center in El Paso when Metallica was there on February 28, 2019.

Some liked that O'Rourke appeared to be standing in line just like regular folks rather than expecting VIP treatment.


What I like is that he does not take advantage of his fame to cut the line. Integrity matters.

And, naturally, others couldn't resist the opportunity to get in political jabs. One likened Iron Maiden's zombie-like mascot Eddie to U.S. Sen. Rick Scott, the similarly gaunt and creepy Florida Republican.


...oddly, every album cover of theirs has Rick Scott on it.

Yeah, we can't tell them apart either, come to think of it.