Port San Antonio to build office tower, hundreds of millions of dollars in other new facilities

The former Air Force base is now home to more than 80 companies employing 16,000 workers.


Construction is expected to start next year on facilities which will include a vertiport for planes and drones that take off and land vertically as well as a research complex that will include a simulated lunar terrain lab.

A multi-story office tower is also in the works — a first for the city's Southwest quadrant. That new building would house DeLorean Motor Co., a startup with long-shot plans to revamp the '80s car brand as an electric vehicle.

Port San Antonio President and CEO Jim Perschbach unveiled the proposed developments at a luncheon hosted by the San Antonio Hispanic Chamber of Commerce. He said the additions will allow the former Kelly AFB to continue attracting companies in sectors such as cybersecurity, defense and robotics.


During a recent, multi-year building spree, Port San Antonio has added hundreds of thousands of square feet of new office and industrial facilities. In May, it also opened the $70 million Tech Port Center + Arena, bringing the South Side its first sizable concert and esports venue. 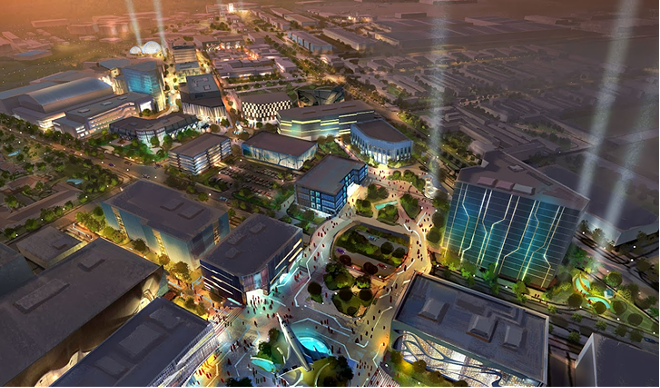 Courtesy Photo / Port San Antonio
A conceptual rendering of future development along the Port’s main entrance at General Hudnell Dr.
Stay on top of San Antonio news and views. Sign up for our Weekly Headlines Newsletter.