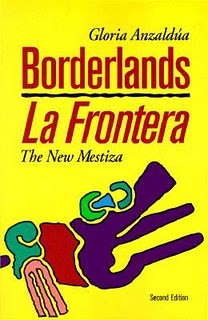 “In a constant state of mental nepantilism, an Aztec word meaning torn between ways, la mestiza is a product of the transfer of the cultural and spiritual values of one group to another.  Being tricultural, monolingual, bilingual, or multilingual, speaking a patois, and in a state of perpetual transition, the mestiza faces the dilemma of the mixed breed: which collectivity does the daughter of a darkskinned mother listen to?”

I'm not bringing you a critical review of the book.  It's been done - and for good reason, I might add.  Instead, it's time to give pause to the ideas that brought me here, and it's time to share at least a part of the wealth.  For my Xicanas out there who haven't peeked underneath the covers of this text, do it now.  Because behind all of the scholarly, academic jargon is a lush and poetic insight into our existence.  We may not know what the meaning of life is yet, but with Anzaldúa's text in tow, I think we Xicanas have a head start on our way to discovering it.

A book that defined the identity of a generation and that continues to do so in college classrooms throughout the country, Borderlands/La Frontera was the formative text on Xicanisma and speaks to the idea of the mestiza as a woman who lives not in spite of her pluralistic existence, but because of it.  Without lending herself more to the monoculture (otherwise known as White America) than her own (or vice versa), mestizas - also known as those of us who live in this "between" space - begin to form identities that are distinctly separated from the masses and inextricably linked to a deeper knowledge of Self.

The "between" space.  A world we occupy everyday, consciously or unconsciously.  Take San Antonio, for instance.  Northerners tend to think of us as a far away land where we play Cowboys and Indians all day, occasionally parking our horses so we can stop to eat enchiladas (okay, so the part about enchiladas is probably true).  And South of the border, San Antonio is a Promised Land, where we wipe the sweat from our brows with thousand dollar bills and sip frozen margaritas to celebrate Mexican Independence on Cinco de Mayo (for those of you who don't know, Cinco de Mayo is not a celebration of Mexican Independence).

And so, a question to my mestiza readers: do you realize how multi-faceted you are?  Do you realize the layers of depth that make up the whole of You?  Planted deep in our souls are indigineous roots that connect us to history, and at the forefront of our identities is a Mexican-American culture that keeps those roots alive.

While we are connected to a larger and familial mestiza/o community, our personal narratives are formed through experience, ideology, age, class, skin color, gender-defined location in a patriarchal space, ideas of feminism and femininity, spirituality, education, and language.  Among these and other elements of our lives is an insight into how we can begin to differentiate own own existential paths from those of our fellow mestizas - those who do not act upon the realization of identity.  It is on this path that we will contextualize ourselves in a grander ideological space, creating a resolution to the dilemma that is articulated by Anzaldúa.  What we find is that we do not have to choose which collectivity we should listen to.

In terms of coming into a mestiza consciousness, or conocimiento, we have the power to embrace—or reject—traditional stereotypes on our own terms.  We tread a different ideological path toward and around conocimiento, a path that is enlightening and mysterious, evolutionary and the same, unfamiliar and natural, a path that liberates the mestiza’s reality from a time when our voices were silenced by cultural stereotypes, when patriarchy dictated our existence, and when identity paralleled social norms.