After Republican lawmakers launched reviews of books on race and gender in schools, public libraries around the state have faced book challenges from local residents. 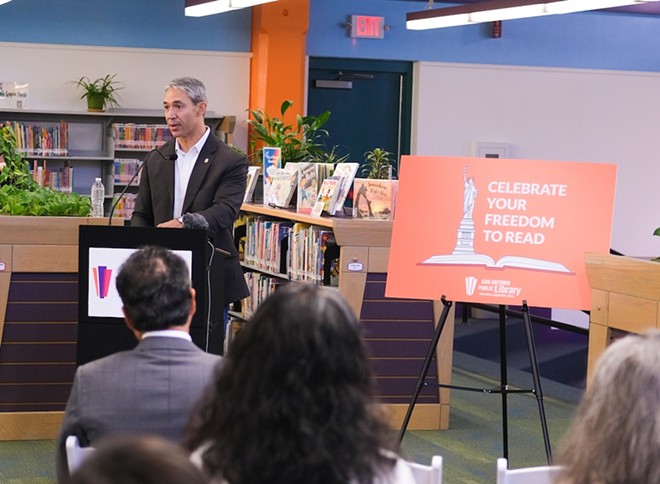 Courtesy Photo / City of San Antonio
Mayor Ron Nirenberg speaks Wednesday about the Freedom to Read campaign.
In a pushback against a spate of book bans around the state, Mayor Ron Nirenberg and the San Antonio Public Library (SAPL) affirmed the city's support of unbridled access to information.

Nirenberg and SAPL Director Ramiro S. Salazar appeared Wednesday at the Bazan Branch Public Library to kick off the library's Freedom to Read campaign. The campaign is a response to ongoing efforts by right-wing lawmakers to strip library shelves of books related to race, sexuality and race they deem inappropriate.

“Over the last year, an uptick in book review requests and challenges have occurred in public school libraries and public libraries across the nation and Texas,” Nirenberg said in a statement. “We want to make it completely clear that the City of San Antonio combats censorship in all its forms and fully supports complete access to information within our public library system.”

The campaign kickoff follows a May 12 resolution from Nirenberg and city council supporting SAPL’s commitment to keep banned literature on its shelves.

Since then, public libraries, including those in Victoria, Irving and Tyler, have faced book challenges from local residents. In November, San Antonio's North East Independent School District yanked more than 400 books from its shelves in response to Krause's probe.

“Public libraries house extensive collections of materials that inspire a broad spectrum of viewpoints, beliefs, emotions and experiences,” Salazar said in a statement. “Public Libraries also do not subscribe to any one mode of thinking or political ideology, so it is critical to our mission to include materials that represent the viewpoints of all members of the communities we serve and represent.”

The SAPL's Freedom to Read webpage features a list of banned and challenged literature, a slideshow on the library's commitment to information access, a link to council's resolution and a video of Nirenberg and Salazar’s press conference.