San Antonio's U.S. House delegation unchanged by midterms except for one seat

As evidence of gerrymandering's grip on the political landscape, none of the five districts in the Alamo City delegation changed parties. 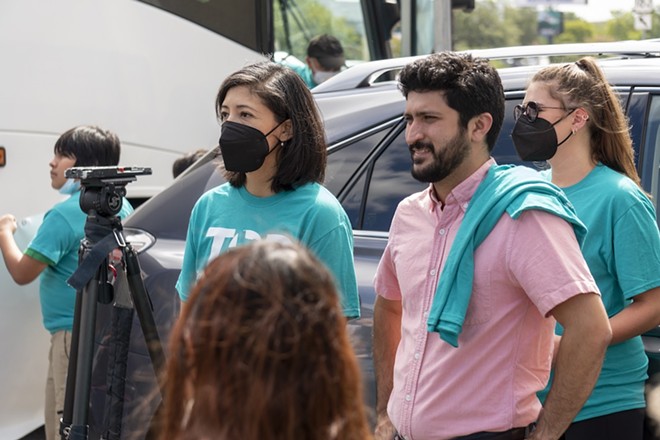 Courtesy Photo / Greg Casar
Greg Casar (in pink shirt) attends a protest on behalf of residents of a San Antonio apartment complex.
As further evidence of gerrymandering's lock on the political landscape, four of San Antonio's five congressional districts look to be unchanged in Tuesday's election. And the one that switched hands is still controlled by the same party.

In the case of the single district that gained new blood — the 35th, comprised of both central Austin and downtown San Antonio — that switch came after its longtime U.S. Rep. Lloyd Doggett, a Democrat, opted to run in another district.

Enter progressive Democrat Greg Casar, a former Austin  city councilman, who was almost guaranteed to win the seat in the dependably blue 35th. Indeed, Decision Desk HQ called his victory early in the evening, and at the Current's 11:30 p.m. press time, Casar led with 72.8% of the vote to GOP opponent Dan McQueen's 27.2%.

Democratic U.S. Rep. Henry Cuellar, the 28th District's longtime incumbent, looked like he might have been in hot water after Republicans poured millions into unseating him. However, as of press time, he held a 57%-to-43% lead over challenger Cassy Garcia, according to Decision Desk HQ. Cuellar's district stretches from his hometown of Laredo into the Alamo City.

U.S. Rep. Joaquin Castro, a Democrat first elected to the House in 2013, is projected to once again represent the people of the blue-leaning 20th District, largely comprised of SA's West Side. As of press time, he had a vast 69.5%-to-30.5% lead over Republican challenger Kyle Sinclar, according to Decision Desk HQ.

Finally, U.S. Rep. Tony Gonzales, a Republican, will once again represent Texas' 23rd, a district that stretches from parts of San Antonio to a wide swath of the border. That territory was once considered a swing district, however, the latest GOP-led redistricting redrew its lines to make it considerably more red.  At press time, he had a 56.2%-to-39% lead over Democrat John Lira.