Steve-O may have made the Buc-ee's stop en route to McAllen, where he was scheduled to perform with his Bucket List Tour. 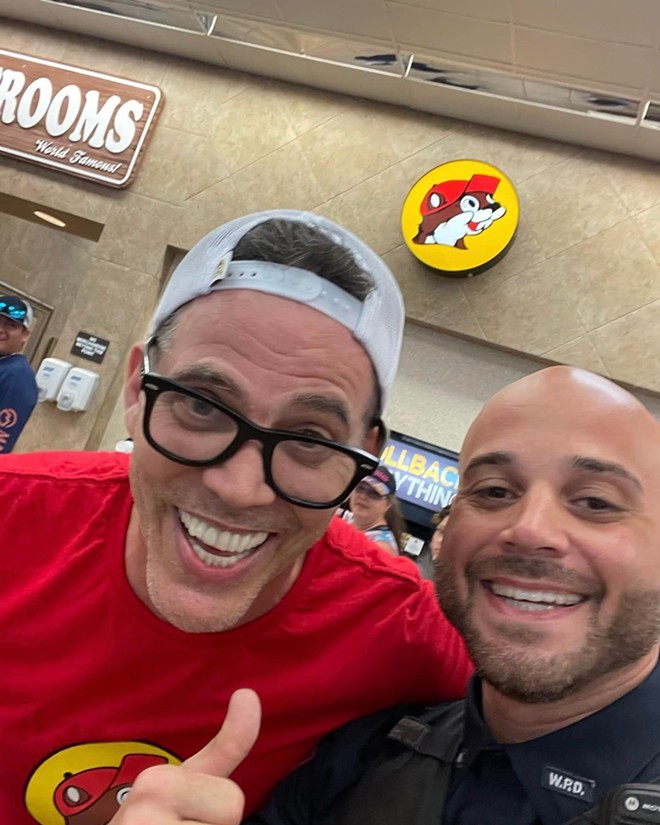 Facebook / Wharton Police Department
Jackass star Steve-O takes a selfie with a Wharton police officer at a Buc-ee's near Houston.
Folks stopping at a Buc-ee's outside of Houston on Monday got more than just beaver nuggets and a clean restroom.

Instead, they were treated to a show from Jackass star Steve-O.

The danger-seeker from the movie and MTV franchise was captured on video entertaining guests and skating on a counter at a Buc-ee's in the town of Wharton, as first reported by the Express-News.

In a TikTok posted by user @terrdave, Steve-O — sporting a T-shirt emblazoned with the face of Buc-ee the Beaver — rides a skateboard across one of the truck stop's counters and jumps off moments before the board hits the floor.

The Express-News speculates Steve-O — whose real name is Stephen Glover — was en route to McAllen, where his Bucket List Tour was scheduled to stop Tuesday. The tour is billed as a "multimedia experience" where patrons can expect to see the entertainer perform wince-inducing stunts usually reserved for Jackass movies.

"Now, there's footage of what's called an epidural, where a doctor in disguise puts a four-inch needle into my spine and injects a drug into my spinal cavity to paralyze me from the waist down, while I'm in full sprint," Steve-O told Yahoo Canada about the tour.

Although known for extreme stunts, the Buc-ee's appearance suggests Steve-O has some respect for law and order. Wharton Police Chief T.D. Lynch told the Express-News the star "complied without any incident or any disrespect" when staff asked him to get down from the counter and even took photos with an officer.