The proposal is aimed at making sure power providers and electricity generators have enough power on hand in case of increased demand. But it’s not clear how it would hold up in unexpected weather, an expert said. 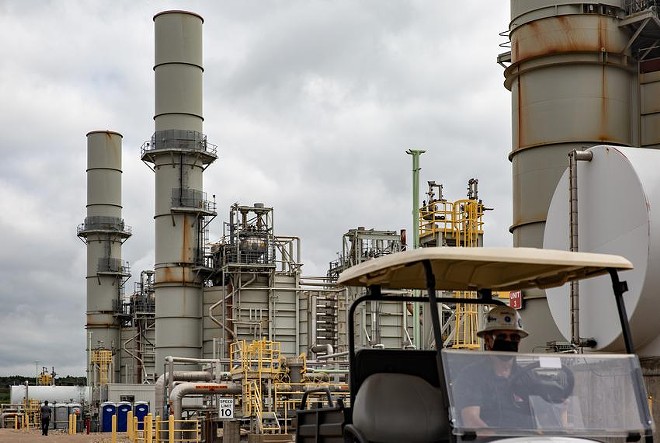 Texas Tribune / Shelby Tauber
Vistra Corp.’s Midlothian power plant. The Public Utility Commission of Texas is recommending changes to the state’s electricity market that aim to ensure a more reliable power supply during extreme weather events like the February 2021 winter storm that caused widespread power outages in Texas.
After several months of hammering out how to make the Texas power market more reliable in the wake of the deadly 2021 winter storm, state officials have landed on what they say is a solution.

Under a new proposal unveiled Thursday, power providers would be required to buy “performance credits” from power generators — which are intended to guarantee that both have enough electricity to meet increased demand when power demand is high enough to stress the electrical grid. If providers don’t buy the credits or generators don’t meet their end of the bargain, both could face financial penalties.

If the idea is implemented, “this will be the first time … that the companies that sell power to households — who you send your check to when you pay your bill each month — this will be the first time they’re actually responsible for ensuring they can deliver that power,” said Peter Lake, chair of the Texas Public Utility Commission, the board that regulates the state’s power grid operators.

The public will have roughly a month to comment on the plan before the PUC’s final vote on Dec. 15.

But it’s unclear how the grid would function under this framework in periods of unexpected heat or cold, said Alison Silverstein, a former senior adviser at the Public Utility Commission of Texas, which regulates ERCOT.

A consultant hired by the Public Utility Commission, which oversees the largely deregulated Texas power market, to analyze different proposals for overhauling the power market did not factor in how extreme weather events such as the 2021 winter storm would stress the grid operating under the credit system — writing in the report that “such analysis is beyond the scope of this study.”

Silverstein pointed to this year’s unseasonal heat wave in May, which forced six power plants offline.

“That was not on anybody’s bingo card for ‘this is when we’re going to have a reliability problem,’” Silverstein said.

The early heat in May didn’t trigger widespread power outages. But just over a year earlier, a February winter storm sent the state power grid close to collapse when demand suddenly spiked, triggering power outages that left millions of Texans without power or heat for days in subfreezing weather. Hundreds of people died and the fallout from the storm caused a wave of reforms by state lawmakers, the PUC and the grid operator — including the current push to overhaul the state energy market.

State lawmakers last year ordered the Public Utility Commission to look at ways to overhaul the market — which is largely unregulated and functions primarily off of supply and demand. That system led to disastrous consequences during the winter storm when power suppliers were allowed to charge exorbitant prices as demand for electricity skyrocketed — but frozen equipment meant that they still couldn’t meet that demand.

State officials have worked to find a fix that would make the grid more reliable without further driving up consumers’ electricity bills. Out of several options analyzed by E3, a California consulting firm, the “performance credit mechanism” fix seemed to gain favor among a majority of members on the five-member commission Thursday.

Theoretically, it would insulate consumers from sudden spikes in their electric bills because providers — including publicly-owned power providers like Austin Energy and retail providers like TXU Energy or Reliant Energy — and generators, which operate the state’s power plants, agree ahead of time to have enough reserve power on hand during peak demand periods, Lake said.

The consultant’s analysis said using performance credits would cost an estimated $460 million more per year. But Lake said competition among generators would theoretically drive down prices of the credits. By avoiding massive energy price spikes like those seen during the 2021 winter storm, Lake said power customers “shouldn’t, according to this analysis, experience any significant impact on their bill.”