Texas ranked well in the equality of employment, wealth and education, according to the analysis. 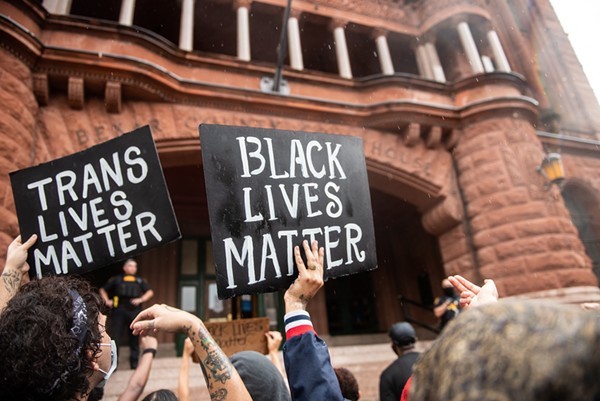 Jamie Monzon
Protesters raise signs asking for racial equality outside of the Bexar County Courthouse during a 2020 march.
While slavery, segregation and racial violence all figured heavily in the history of Texas, it now stands among the most racially integrated U.S. states, according to a new study.

WalletHub ranked all 50 states and the District of Columbia using metrics including health, employment and wealth, access and educational attainment, and social and civic engagement. Researchers then compared those metrics between Black and white residents of each state.

Texas scored exceptionally well when it came to employment and wealth, coming in at No. 5 overall. It also had the fifth-lowest gap between the number of Black and white residents living below the poverty line.

The Lone Star State also scored well in education and tied as the state with the lowest racial divide between the number of Black and white adults with a high school diploma, according to the study.

However, Texas only ranked No. 18 when it came to social and civic engagement, and No. 15 when it comes to the health of Black residents.

The study named Hawaii the most racially integrated state in the nation, while the District of Columbia was named the least, according to WalletHub.

Even though the findings are food for thought, social justice academics would likely bristle at the limited number of metrics WalletHub used in its study. Notably missing, for example, are incarceration rates.