Here's What We Know About Devin Kelley So Far

Facebook screenshot via Devin Kelley
As more information comes into focus about Devin Patrick Kelley, the 26-year-old gunman in Sunday's mass shooting in a Sutherland Springs church, we've begun to see some familiarities between Kelley and past gunmen in large-scale shootings.

According to public records, Kelley, who died in a car crash following the Sunday morning shooting that left 26 dead, served in the Air Force for four years. He was stationed at the Holloman Air Force Base in New Mexico in 2012 when he was court-martialed and convicted for assaulting his wife and young child. Kelley was sentenced to a year in prison. The felony lost him his Air Force ranking — and stuck him with a "bad conduct" discharge from the military (unlike a dishonorable discharge, veterans with a bad conduct charge can still possess a gun). Records show Kelley obtained a divorce in 2012.

Having a history of domestic violence has almost become standard for many of the men charged with mass shootings in the past few years. The men behind the fatal mass shootings at Orlando's Pulse nightclub, a Colorado Springs Planned Parenthood, D.C.'s Republican Congressional softball practice, Sandy Hook Elementary, Virginia Tech, and, most recently, a concert on the Las Vegas strip — they all had a history of domestic abuse.

Its become so common that the greatest predictor of who will commit a mass shooting is identifying people who've committed domestic assault. 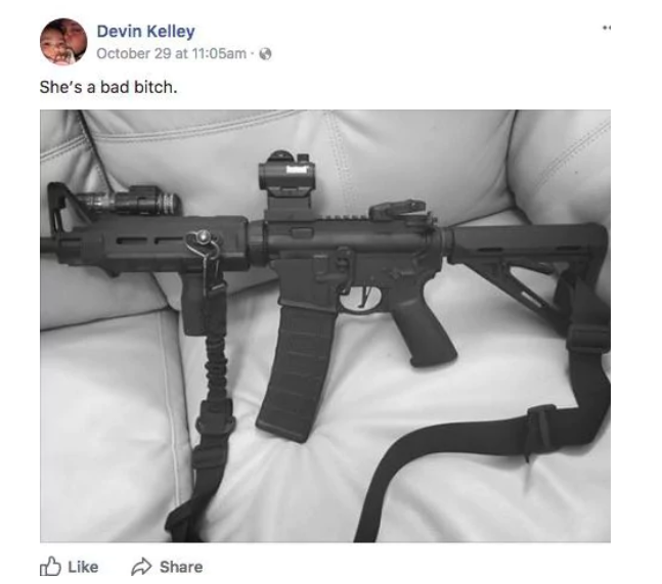 Facebook screenshot via Devin Kelley
Kelley, like many of these past gunmen, also had a large cache of heavy-duty assault rifles. A photo pulled from his Facebook page (before it was deleted), shows what appears to be an AR-15 style semi-automatic weapon. The photos, posted just over a week ago, is captioned: "she's a bad bitch."

While Kelley's discharge wouldn't have kept him from obtaining a gun, his domestic abuse felony charges should have. In 2016, a U.S. Supreme Court decision made it illegal for people convicted for a domestic assault to own a gun. That is, if they are married or formally married to the victim — which Kelley allegedly did. (The gun-owning loophole for men who've abused girlfriends or women they don't live with is a whole other story.)

Kelley, a New Braunfels resident, is currently remarried to a woman with family in Sutherland Springs.