Abortion-rights advocates said women across the U.S. will now face the reality that Texans have been living with since the passage of the state's so-called 'heartbeat bill.' 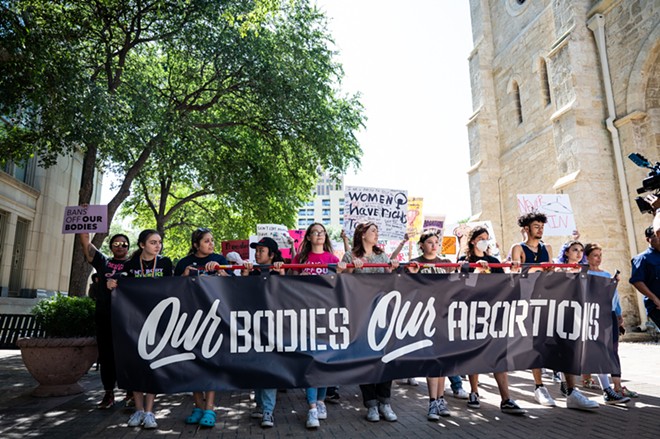 Jaime Monzon
Women carry a banner through Downtown San Antonio during a protest defending abortion rights.
Texas progressive lawmakers and women' health providers condemned the U.S. Supreme Court decision to overturn Roe v. Wade while acknowledging that abortion access in much of the country will soon resemble that of the Lone Star State.

Women in Texas have been living under near-complete ban on abortion since the Republican-controlled Texas Legislature enacted Senate Bill 8 last year. Following the high court's decision, roughly half of U.S. states are expected to enact laws prohibiting the procedure.

"The impact of Texas Senate Bill 8 foreshadowed the dangerous consequences of the extreme abortion restrictions this ruling will allow," said U.S. Rep. Joaquin Castro, D-San Antonio. "The Supreme Court's action today will force women and girls to carry pregnancies that were conceived through rape and incest and empower extremists to persecute people who suffer a miscarriage or high-risk pregnancy that threatens their life."

Castro urged the U.S. Senate to codify abortion rights through the Women's Health Protection Act, which has already passed the U.S. House.

In Texas, all abortions, including those involving rape and incest, will be illegal in 30 days due to a so-called "trigger law" enacted by the GOP-controlled state legislature.

However, getting an abortion in Texas was already made far more difficult by SB 8, colloquially known as the "Heartbeat Act," which passed last year. The law made abortions in illegal in Texas once a heartbeat was detected in the womb. As a result, women in Texas seeking an abortion headed to other states and Mexico.

"The Texas six-week abortion ban has forced people to travel out of state for health care and carry pregnancies against their will — this is a preview of the chaos and harm to come as a result of [the Supreme Court] decision," said Diana Gómez, advocacy director for advocacy group Progress Texas.

In a joint statement, leaders from Planned Parenthood Texas reiterated Gómez's concern that women across the United States will now face reproductive-health hardships like those in Texas.

"Texans know all too well the reality of living in a post-Roe world," the statement said. "For more than nine months under S.B 8, Texans have been denied access to abortion in their own state and have been forced to continue a pregnancy, seek abortion outside the health care system, or travel hundreds or even thousands of miles if they can secure the funds, time off from work, child care, and transportation needed to access abortion out of state. Providers have been forced to turn away patients. It's heartbreaking and completely preventable."

"Our nation must take immediate action in response to this horrible decision by right-wing, Trump-appointed justices," Casar said in a press release. "We must immediately direct public funds and private donations to help people get abortion care outside of Texas, beginning in one month. We must push all district attorneys and police departments to not arrest or prosecute Texans under these draconian anti-abortion laws. And we must fight like hell to expand the Supreme Court and pass the Women's Health Protection Act. Texans will not stop fighting back, every day, until this horrific ruling is undone."