Department of Public Safety Sgt. Juan Maldonado is the first state police officer fired in the aftermath of a botched police response to the shooting. He was the highest-ranking state trooper to initially respond to Robb Elementary School. 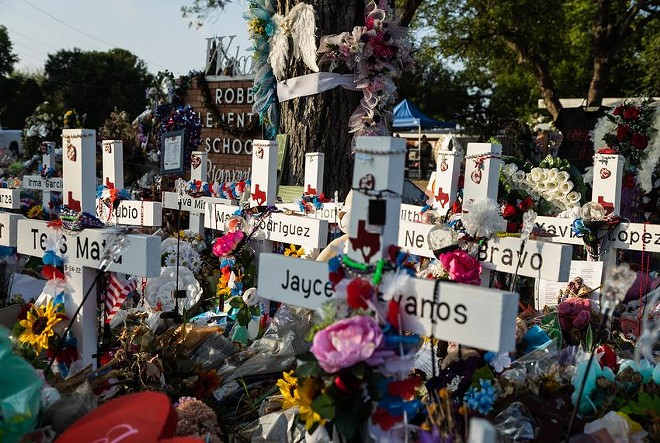 Texas Tribune / Evan L'Roy
Hundreds of flowers, toys and candles surround a memorial in June for the 21 victims killed in the Robb Elementary shooting in Uvalde.
The Department of Public Safety has fired Sgt. Juan Maldonado, one of the state troopers who responded to the May school shooting in Uvalde that left 21 dead.

Maldonado is the latest law enforcement official — and the first state police officer — to be fired in the wake of the deadliest school shooting in Texas history, during which more than 300 officers from agencies across the state waited more than an hour to breach a door and kill the shooter.

Maldonado was the highest-ranking state trooper to initially respond to the May 24 shooting. Body-camera footage released by the Uvalde Police Department shows that at least one DPS officer — Maldonado — was outside of the school within four minutes of the shooting.

After the gunman fired more than 100 rounds, Uvalde Police Sgt. Eduardo Canales, a commander of the local SWAT team, stumbled outside. With blood on his hands after a bullet fired by the gunman grazed his ear, he encountered Maldonado.

“Dude, we got to get in there,” Canales told Maldonado, who, according to DPS, drove one of his closest friends, Ruben Ruiz, a Uvalde school district police officer, to the campus that morning. Ruiz’s wife was a teacher at the school.

Eleven minutes later, Ruiz told officers that his wife had called him and said she had been shot. But officers continued to treat the situation as if they were dealing with a barricaded suspect instead of an active shooter. According to law enforcement doctrine, active shootings require that the first action by officers, no matter their rank, should be to immediately “stop the killing.”

Maldonado was a 23-year veteran of the state agency and a public information officer for the region. He is the latest law enforcement official to lose his job over the botched response to the school shooting.

A spokesperson for DPS said Maldonado was sacked at the end of a formal investigation and has the opportunity to appeal. Neither Maldonado nor his attorney could be reached for comment late Friday.

State troopers outnumbered local law enforcement 2 to 1 outside Robb Elementary, but in the aftermath of the massacre, DPS officials carefully shaped the narrative to cast local authorities as incompetent.

Earlier this year, DPS Director Steve McCraw told lawmakers that the time it took for law enforcement to rescue teachers and students at the elementary school was an “abject failure.” He said Pete Arredondo, who was the Uvalde schools police chief at the time of the shooting, was the incident commander at the scene. That’s something Arredondo has disputed. McCraw called Arredondo the only obstacle between armed police and the teenage shooter.

“I’m reluctant to encourage or even think of any situation where you’d want some level of hierarchy where a larger police department gets to come in and take over,” McCraw said in June.

Weeks later, a Texas House committee investigation into the shooting and police response found that law enforcement descended upon the school in a chaotic, uncoordinated scene that lasted for more than an hour. The group was devoid of clear leadership, basic communications and sufficient urgency to take down the gunman, the report said.

The investigators said that in the absence of a strong incident commander, another officer could have stepped up to the task.

“These local officials were not the only ones expected to supply the leadership needed during this tragedy,” the report said. “Hundreds of responders from numerous law enforcement agencies — many of whom were better trained and better equipped than the school district police — quickly arrived on the scene.”

In September, as scrutiny of state troopers’ role in the botched police response mounted in the months after the shooting, McCraw said that he wished DPS officers had seized control of the operation. He also said he would resign if his troopers had “any culpability” in the flawed police response to the shooting.

According to an investigative record obtained by The Texas Tribune, Maldonado told investigators he was focused on maintaining the perimeter of an external school building as other officers waited to confront the gunman.

“My focus was saving kids, saving whoever I could save, because it was just a horrible situation,” he said. “Now if someone gave me a command … and they told me, ‘Hey you need to go here,’ I’m going to follow that instruction because that’s what I’m told to do and I’m going to follow my orders.”

In September, the agency announced that seven officers, including two command staff, had been referred to the internal affairs division to investigate their conduct during the shooting.

Earlier this month, school officials suspended the entire district police department after protesters held a days-long protest outside the Uvalde school district administrative building during which demonstrators called for the removal of all of its officers until investigations into the police department’s response to the shooting are complete.

That suspension of the small police force came on the heels of school officials firing a recently hired district police officer after it became public that she was one of the first state troopers to arrive at Robb Elementary School on May 24.

In August, the school district fired Arredondo, who was widely criticized for his response to the shooting.

For months, some family members of shooting victims called for Harrell’s resignation, arguing that he and other school officials should be held responsible for failing to prepare for a school shooting.

Jinitzail Hernández contributed to this story.