Texas woman arrested on charges that she hit, threatened group of people for having Indian accents

The woman, who identified herself as Mexican American, told the targets of her rage that her situation is different because she was born in the U.S. 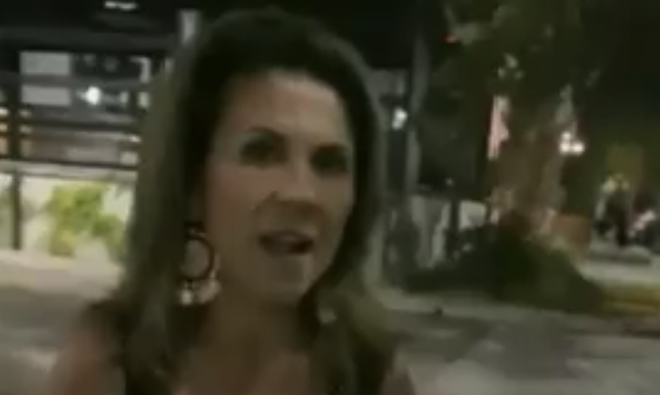 Twitter / @davenewworld_2
The woman can be seen reaching into her bag before threatening to shoot one of the people filming her tirade.
Twitter and Reddit users are in an uproar after a North Texas woman was caught on video in a racist tirade, insulting and physically assaulting a group of other women because they spoke with Indian accents.

In the clip, shared widely online Thursday, a suspect Plano police identified as Esmeralda Upton verbally harasses four women in a parking lot about their country of origin before throwing punches and threatening to shoot the one filming her outburst.

Authorities arrested Upton Thursday afternoon on one charge of assault bodily injury and another of terroristic threats, according to a Plano Police Department statement. The suspect is now being held on a $10,000 bond, and detectives are investigating the incident as a potential hate crime, the department also said, noting that more charges may be forthcoming.

In a Facebook post, alleged victim Rani Banerjee said she and her friends Sabori Saha, Anamika Chatterjee and Bidisha Rudra were leaving the Sixty Vines restaurant in Plano on Wednesday when Upton approached and began hurling insults.

"I hate you fucking Indians," Upton can be heard telling them in the video. "All these fucking Indians, they come to America because they want a better life. But they're obviously not living the great life in India."


In the clip, one of the women targeted in Upton's tirade asks why she's harassing them after Upton identified herself as being a Latina. Upton fires back that things are different for her because she was born in the United States.

English is one of the most commonly spoken languages in India. The former British colony is home to some 125 million English speakers.

"Like everywhere I fucking go, you Indians are everywhere. If life was so great in India, then why the fuck are ya'll here," Armendarez-Upton continues in the clip. "I'm Mexican, and I paid my fucking way here."

After that outburst, the video appears to show Upton strike the person using her phone to film the tirade, landing several blows.

Text embedded in the clip also alleges Upton showed a gun and threatened to shoot someone. No firearm is visible in the footage, but toward the end, Upton digs into her purse and says, "You'd better turn that goddamn phone off, or I swear to God, I'll fucking shoot your ass."

Asian immigrants have long been part of the Texas story, with Houston boasting the third largest Vietnamese population in the U.S. and the Dallas suburb of Frisco having one of the state's largest Asian populations, according to WorldAtlas.com.

Even so, attacks against Southeast Asians are on the rise across the nation, according to a recent NPR report. Earlier this month, a Midland man was sentenced to 25 years in prison for attacking an Asian family he blamed for the COVID-19 pandemic.