The Spurs Enter An Offseason Filled With Tough Questions 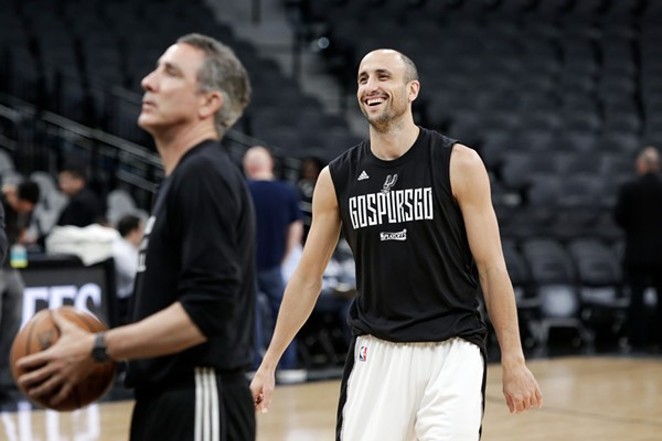 Josh Huskin
Manu's impending retirement is the first, and heaviest, question on everyone's mind right now
For the second game in a row – and for the last time this season – the depleted Spurs went down swinging against the Warriors. But neither the 129-115 final score, nor the overwhelming talent of their opponents, could distract fans in the arena from the greater finality of the moment: that this could’ve been Manu Ginobili’s last game in the NBA.

As the buzzer sounded, chants of “Manu” and “one more year” continued to reverberate around the AT&T Center. And while the 39-year-old did little to confirm or deny suspicions about retiring last night, the fact that he started the game, along with the image of him leaving the court with one finger raised high, certainly made for a fitting finale to a Hall of Fame career.

Here’s what a restrained Gregg Popovich had to say after the game:

"He deserved to have that night of respect." pic.twitter.com/6efY8j6kqt


Manu’s impending retirement was the first, and heaviest, question on everyone’s minds heading into last night. Like all other doubts about the future, it had been far more conceptual until now, hovering in the air faintly but unassailably. As Game 4 went on, with every iconic drive and score by the Argentinian, that feeling began to manifest itself in the chests of any fan who’s cheered on this team over the past decade-and-a-half.

With the season over, all those questions hanging over the team, from retirement and free agency to player health, begin to carry weight. Let’s start with what we do know:

MVP finalist Kawhi Leonard will be back, after sitting the last three games of this series with an ankle injury. Danny Green, Kyle Anderson and LaMarcus Aldridge (who, despite some fans’ wishes, is still not likely to be traded) will all bring experience and continuity to a franchise that has always valued both. Young guys Dejounte Murray and Davis Bertans will come back better and ready to contribute in bigger ways.

From there, things get more nebulous.

Much of the team’s flexibility depends on whether or not Pau Gasol opts in to the second year of his contract. He’s currently on the books for $16 million and carved a solid role for himself as a floor-spacing center coming off the bench, but he may look to seek a different role (or a more long-term deal) elsewhere.
Tony Parker’s recovery, after rupturing his quadriceps tendon earlier in the playoffs, will be something to monitor – both in how it impacts his availability and how the Spurs approach the point-guard situation.

His long-time understudy, Patty Mills, would seem like a likely guy to step in and take over starting point-guard duties (as he did in the playoffs), but he’s a free agent and will be in high demand.

If Mills receives a Godfather offer from another team, the Spurs could do worse than retaining the services of rookie Bryn Forbes, who is not yet guaranteed for next season and possesses a similar skillset to the 28-year-old Mills. For what it’s worth, Forbes saw the floor for a playoff-high 24 minutes in Game 4.

Dewayne Dedmon and David Lee have player options for next season, as well. The duo often referred to as ‘Ded-Lee’ both played on bargain deals this season and may decide to test the market.

Anything can happen with any of these players but, collectively, it’s easy to foresee a very different team taking the floor in 2017-18. It sets a weird and exciting, but also melancholic, tone entering the summer.

Either way, fans will likely spend the next few weeks looking back – not only on the remarkable success of last season, but on the superlative 15-year run of one beloved Spur, who may have left the floor for the last time last night.