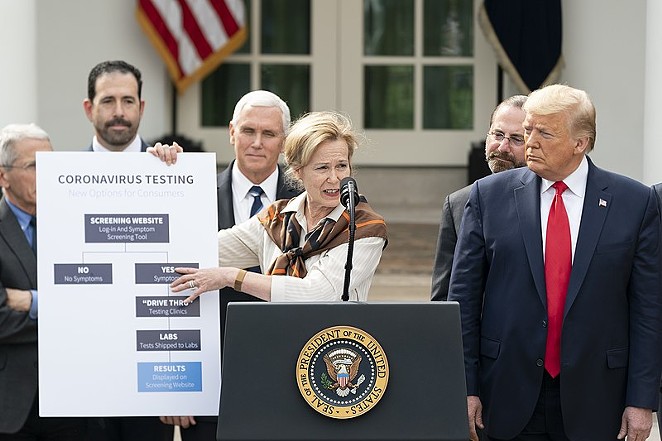 In the wake of a the president's erroneous and dangerous suggestion last week that injecting disinfectants into humans might cure the coronavirus, the Post analyzed annotated transcripts of Trump’s coronavirus briefings from Monday, April 6, to Friday, April 24.

Beyond the alarming amount of misinformation contained in the comments, the study showed that the commander in chief was "using the White House lectern to vent and rage; to dispense dubious and even dangerous medical advice; and to lavish praise upon himself and his government."

Trump spoke for more than 28 hours in the 35 briefings held since March 16, eating up 60 percent of the mic time, according to the Post. White House officials and public health experts and others got the remaining amount.

The president's time in the spotlight included two hours spent on attacks of political rivals and 45 minutes praising himself and his administration, the analysis also found. During all that talking, he took up just 4½ minutes expressing condolences for coronavirus victims.

"The briefings have come to replace Trump’s campaign rallies — now on pause during the global contagion — and fulfill the president’s needs and impulses in the way his arena-shaking campaign events once did: a chance for him to riff, free-associate, spar with the media and occupy center stage," the Post writes.

The president's off-the-cuff comments during the briefings ended in a political train wreck on Thursday after he suggested bleach or other disinfectants could work "almost as a cleaning" to rid the human body of the coronavirus.

Afterward, White House officials were forced to play damage control and calls to poison control centers around the country spiked in response. San Antonio's South Texas Poison Center was bracing for such an uptick the day after the president's briefing.

The White House's Monday briefing has been cancelled, and media outlets report the president's handlers are considering scaling back the events to minimize future damage.