A University of Texas, San Antonio marketing professor is catching heat for a study claiming women's menstrual cycles sway their decisions at the voting booth.

On Wednesday night, CNN posted – then hours later retracted – a story citing UTSA assistant professor of marketing Kristina Durante and her recent study, “The Fluctuating Female Vote: Politics, Religion, and the Ovulatory Cycle.” Durante's study, set to be published in the academic journal Psychological Science, claims single women who are ovulating are more likely to vote liberal, while women in committed relationships are more likely to vote conservative during ovulation.

For her study, Durante and colleagues conducted an internet survey of 502 women who weren't taking hormonal contraceptives to gauge voting preferences. While it's likely any study tackling hormonal effects on voting would be controversial, it's Durante's explanation of the study results to CNN that raised eyebrows (see Jezebel's hilarious/snarky takedown). 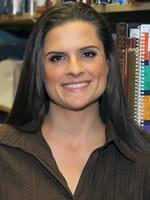 Here’s how Durante explains this: When women are ovulating, they “feel sexier,” and therefore lean more toward liberal attitudes on abortion and marriage equality. Married women have the same hormones firing, but tend to take the opposite viewpoint on these issues, she says.

“I think they’re overcompensating for the increase of the hormones motivating them to have sex with other men,” she said. It’s a way of convincing themselves that they’re not the type to give in to such sexual urges, she said.

Wow. Got that? Married women vote conservative to “overcompensate” for their hormones, while single women let their “liberal” hormones carry them away to Democratic Party.

In an email, Durante said the response to her research has been “overwhelming.” She wrote:

“While many factors influence a woman’s political preferences, the research on the relationship between hormones and decision-making is both relevant and timely. I recognize that the findings may prove uncomfortable for some, but they are based on sound science, have been reviewed by academic peers and have been selected for publication in the nation’s highest ranked psychology journal, Psychological Science. I appreciate the public discussion that has taken place on this topic and encourage anyone interested in better understanding the subject matter to read the study in its entirety.”

CNN editors deleted the story on Durante's work just hours after publishing it, writing, “A post previously published in this space regarding a study about how hormones may influence voting choices has been removed. After further review it was determined that some elements of the story did not meet the editorial standards of CNN." (You can still see the full story here at the network's Indiana affiliate).

Susan Carroll, a professor of political science and women's and gender studies at Rutgers University, told the Current Durante's study plays into a longstanding practice of marginalizing women in politics, business, and other spheres of power because of their biology. Carroll, who was contacted by CNN for comment on the piece, says she eagerly tried to talk the network out of running a story based on Durante's work.

"There's a whole history this report locks into,” Carroll says. “There's a long history of women being kept out of politics and other arenas of society, these reservations over women being in positions of power precisely because of reproduction and ovulation.”

Carroll also contends Durante takes some serious leaps in her conclusions. “The research fails to control for things that we know are associated with voting differences,” she said, like economic status and age. -- Michael Barajas