After the DREAM: Students fighting for a path to citizenship still looking for reliable allies 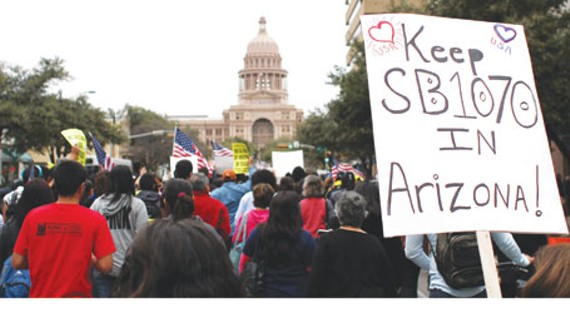 Two months after police arrested over a dozen DREAM Act-supporting activists and students who dug in at U.S. Senator Kay Bailey Hutchison’s San Antonio office and refused to leave, the senator told San Antonio business leaders she would try to craft a new, lesser version of the DREAM Act — one without a path to citizenship.

To the local students and activists, some of whom starved themselves in protest for more than a month targeting Hutchison as a possible swing vote, the early February news added insult to injury.

Hutchison had recently voted with the majority of her party to block the bill that would have provided an eventual path to citizenship for foreign-born children brought into the U.S. illegally by their parents. Coming off the heels of that failure, disappointment and frustration still hang over the heads of many involved in the local push to pass the DREAM Act. As Maria Berriozábal, a former city councilwoman and long-time local activist who joined the DREAMer movement, puts it: “There’s grieving. I use that word very honestly. I feel like we’re healing.”

But there’s not a lot of time to spend in recovery. Many DREAM Act supporters feel their fight for immigrant rights has already entered a new, more arduous stage given the number of bills recently filed in Texas that, if passed, would crack down hard on the state’s undocumented population.

Immigrant rights advocates from all over Texas marched on the capitol last week to protest, hundreds gathering from as far away as the Rio Grande Valley, El Paso, and Houston. While DREAMers were among the loudest voices in the crowd, shouting “education not deportation,” the showing from San Antonio was pretty weak — with only about a dozen in the crowd.

“We’re not organized, and for me, it’s super frustrating,” said Felipe Vargas, one of the original hunger strikers who went up for the march and was scheduled to speak at the rally. “San Antonio couldn’t even fill up a van. And to top it off, it seemed like none of our elected officials gave a shit.

Lawmakers from the El Paso, Fort Worth, and Houston areas spoke on the steps of the Texas Capitol, but representatives from San Antonio were “notably absent,” Vargas said.

To be fair, State Representative Mike Villarreal, a San Antonio Democrat, did speak encouragingly at a local rally in December praising the DREAMers and their supporters, saying he wanted to “bottle” their energy and bring it to Austin and build on their movement; he says he was tied up in committee hearings all of Tuesday. As an appropriations committee member, Villarreal said he’s “engrossed” in the budget debate, warning, “I think this session could turn out to be the most harmful session to Latinos because of the cuts in education.” Villarreal also said he and his staff are working on how to combat a proposed “sanctuary cities” bill, which, as a governor-deemed “emergency” item, could reach a floor debate sooner rather than later.

The DREAMers, for their part, have been trying to step up their efforts, said Claudia Sanchez, one of the hunger strikers. Local UTSA students with DREAM Act Now! have already planned an “Immigration Youth Education Forum” scheduled for March 26, and have also called for supporters to head to Austin today to testify before a House State Affairs Committee hearing. Last week, some traveled to the Valley to meet and organize with college students there.

Sanchez, who attended last week’s march and lobbied lawmakers at the statehouse after the rally, said the sense of frustration with local elected officials began during the protests at the end of last year. “I mean, the mayor met with us, but other than that, we didn’t feel a lot of support from our local leaders and local officials.”

State Representative Lon Burnam, D-Fort Worth, spoke up at last week’s rally  with a blunt message, calling this year “the most racist session of the Texas Legislature in a quarter of a century.” “Burnam nailed it on the head with that comment," Vargas said. "Why couldn’t we have someone there to say something like that?”

Yasmina Codina, a UTSA student and hunger striker who was arrested at Hutchison's office, said the movement needs the organizing power and megaphone that local elected leaders can bring to the table. “I would like to see them reaching out to us more instead of us having to make appointments with them months and months in advance just to see them,” Codina said. “No matter how much work we do on our own, we’re a grassroots effort — we’re students, we’re people with jobs,” she said. “We need their help.”

Even if they have their help now, the moment may have passed – at least for now. Last year was likely the last chance DREAMers had to get a favorable bill passed for some time. With a wide Republican swing in the U.S. House, and a slim Democratic majority in the Senate, it seems even more unlikely a similar measure could get the needed votes today.

At a forum Friday hosted by the San Antonio Hispanic Chamber of Commerce, U.S. Senator Lindsey Graham, R-S.C., touted a 10-point plan to strengthen enforcement along the U.S.-Mexico border as introduced by some of his Republican colleagues last year, saying, in effect, that border security trumps immigration reform and would have to happen first. Neither Graham nor the moderator of the event, Texas Tribune CEO and editor-in-chief Evan Smith, mentioned the failed DREAMer legislation or the hunger strikes that popped up around the country just months ago – and in San Antonio.

When we caught up with him after the forum, Graham said: “To the DREAM Act students, you’re not going to get any relief until we secure that border.”

Benita Veliz, 25, who holds two degrees from St. Mary’s University, first entered the U.S. from Mexico at the age of eight with her family on a tourist visa and never left. Veliz, arrested in 2009 after a routine traffic stop, said she worries whether a legislative solution will come through before she’s forced to leave the country. Though she has been able to stay her deportation for two years, Veliz’s next court date is set for May. “I don’t know if they realize that for people like me it’s a ticking clock,” she said. “May is going to come whether there’s a legislative solution or not.”

Berriozábal was arrested along with 15 others for her part in the sit-in at Hutchison’s offices back on November 29. Before she was arrested, she borrowed a cell phone from a fellow protestor and dialed Mayor Julián Castro, leaving a message saying she feared the group would soon be carted off to jail. “I can’t speak for the students, but if Castro had said, ‘Let me call Hutchison and work on this,’ if he had said he would try to talk to her and take care of it, I would’ve turned it over to him,” she said.

Unfortunately, the phone had already been confiscated by the time Castro returned her call, she said. The group spent the night inside a Bexar County jail cell for their act of civil disobedience.