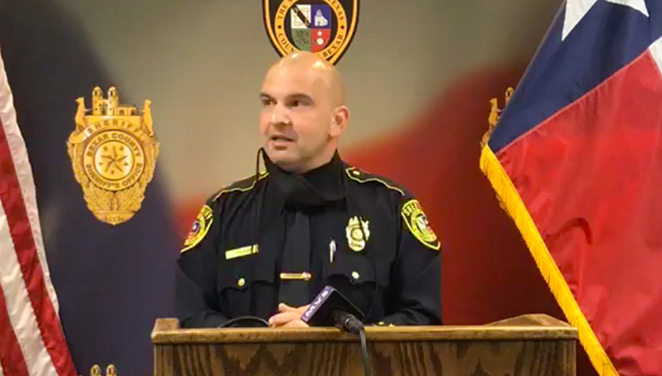 The Bexar County Sheriff's Office is investigating whether an eight-year department veteran broke the law as she participated in this week's pro-Trump rally that morphed into an armed insurrection, KSAT reports.

Sheriff Javier Salazar told the station 46-year-old Roxanne Mathai, a jail lieutenant, posted Facebook photos of herself inside the armed, pro-Trump mob that breached the Capitol complex Wednesday. As of press time Friday morning, her Facebook account appears to have been taken down.

Salazar said be became aware of the photos Thursday and forwarded them to the FBI and Washington DC law enforcement officials to determine whether Mathai violated laws. Five people died in the siege, dozens of law-enforcement personnel were injured and more than 80 people have so far been arrested.

“My intent is that she never set foot in this building again,” Salazar told KSAT.

Salazar also confirmed to the station that the lieutenant had been on leave since October, pending an investigation into whether she had an inappropriate relationship with an inmate.

Among the photos Mathai posted was an image of rioters after they'd busted through a police line and clambered onto the Capitol's balcony, KSAT reports.

“......And we are going in......in the crowd at the stairs...not inside the capitol like the others. Not catching a case lol,” she posted next to photos showing Trump supporters climbing scaffolding around the building, according to the report.

“Not gonna lie.....aside from my kids, this was, indeed, the best day of my life. And it’s not over yet,” she also posted, according to KSAT.