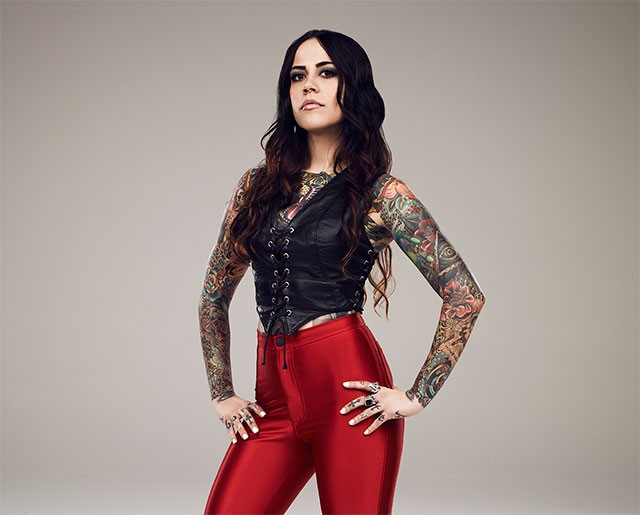 Before the rattling drill of the tattoo gun, there is the calming hum that sounds through the room. The act of tattooing is brash and self-destructive. Those who bear tattoos are loud by design and undeniably distinguishable from the crowd. Just wait until you meet the tattoo artists themselves.

Oxygen Channel brings tattoo artists to the reality show circuit with its second season of Best Ink. What should draw the eye of San Antonio viewers is standout contestant, and local resident, Brittany Elliott from Arc Angel Tattoo.

“Everyone was waiting for the new judge to come out, he comes out and it’s like crickets, dude, everyone was like ‘Who’s that?’” Elliott admits. “I’m not a fan of Fall Out Boy, I’m a metal chick.”

Much of the more entertaining segments are sure to be had in the Flash Challenges. They may come off to audiences as irrelevant and, honestly, represent little in regards to actual tattooing talent. However, the challenges present the artists in foreign environments, which is sure to bring a unique spin to the otherwise tiresome tattoo-show format. Cue the heavy-handed drama music and dim voice-overs.

The first episode finds the contestants slung from ropes spray-painting a mural of self-portraits on a building’s broadside. Elliott admits this was a bit of a departure from her regular comfort zone.

“I was really scared when I had to do it,” she said. “I’m sure I suck at it because I’ve never done it.”

It’s these opportunities to try new art forms that Elliott found most memorable about the show.

What may be a saving grace for the prototypical reality show is where it outpaces similar tattoo shows like Ink Masters. “[Best Ink producers] did their research better and found better artists,” says Elliott, “There were some amazing tattoos being produced.”

“There’s a ton of shops here in San Antonio, but I would say there’s more bad shops than good shops,” she said. “You have to go in shops and look at portfolios because there can be one shop that has one killer artist and the rest suck.”

Though mostly a homebody who takes pleasure in creating her Heavy Metal Treasure clothing in the little downtime she gets from work, Elliott can occasionally be seen frequenting such local haunts as Hogwild Records and various thrift shops. You can check out her work and hopes for the Tattoo magazine cover and $100,000 prize each week on Oxygen.

The new season of Best Ink premiers April 3rd at 10/9c on Oxygen.