Still Claiming Pee-wee 30 Years Later: Diane Salinger On What Would Have Become Of Simone 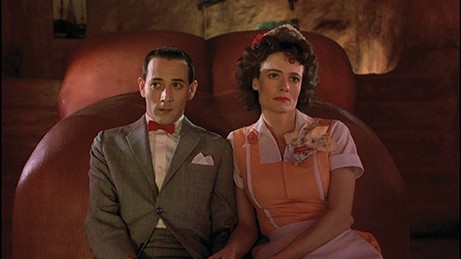 Actress Diane Salinger considers Pee-wee's Big Adventure her favorite movie she's been in over her 30-year career. In the film Salinger plays Simone, a truck-stop waitress and hopeless romantic who connects with Pee-wee on an emotional level while watching the sun rise from a T-Rex roadside attraction. During a phone interview with the Current last week from France where she is shooting a new film on Joan of Arc, Salinger explained why she considers her role in the comedy a dramatic one and if she thinks Simone would still be looking for love in Paris today.

What are some of your fondest memories of starring in Pee-wee's Big Adventure?

I remember the second audition, which was a call back the same day. It was with Paul [Reubens] and Tim Burton and the casting director (Wallis Nicita). We were all in the same room. I remember biting Paul's hand. I was really coming on to him in the scene. (Laughs) He was so shocked. My fondest memories were the scene at the diner and the one at the dinosaur. I remember having to be up at 4:30am to get on the bus in Burbank and go to [Cabazon]. It was a very long day. We had to act like it was a balmy summer night, but it was about 30 or 40 degrees. Paul and I were freezing.

What was it like on that day working inside the dinosaur?

(Laughs) I remember Tim asking me to lower my voice when I said, "Did you ever had a dream like that?" I didn't exactly know why, but it certainly worked well in the movie. It was a wacky comedy, but I approached it as a drama. I'm not trying to be funny at all. [Simone] just has this intense yearning and a dream and wanted to share it with Pee-wee.

The movie is a lot deeper than people give it credit.

Yes, there are so many levels to it. Pee-wee is an archetype. It's the story of the eternal boy. Everybody has that in them. I think that's why the character is so beloved. The reason Paul [Reubens] can keep doing it and doing it is because everyone yearns to be back in that time or have that experience of being the eternal child. I think most Americans have a sense of yearning to connect to just like Pee-wee. He says and does the most outrageous things and we're cheering him on because we want to be doing it, too.

At the end of the film, we see you and your new boyfriend Pierre ready to go to Paris. Thirty years later, do you think Simone would still be living there?

(Laughs) I hope she stayed in Paris and married the love of her life. I think she's kind of like Wendy from Peter Pan. Wendy finally grows up and Peter Pan, like Pee-wee, does not. She gets married and has a child of her own. I would hope Simone keeps her inner child very much intact, but finds a man she can be happy with for the rest of her life. She says her dream is to live in the City of Eternal Love. She's looking for love that lasts.

I have a feeling Pierre gets dumped soon after they arrive in Paris.

(Laughs) Yes, I think so, too. I don't think he was the one. I think Simone is the most like me than anyone I've ever played.