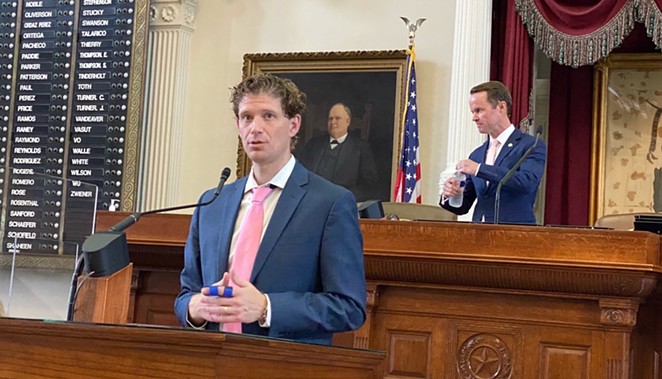 Krause, a founder of the Tea Party-affiliated Texas Freedom Caucus, made the request Monday in a letter sent in his capacity as chair of the House Committee on General Investigating. The probe Krause is initiating comes a month after he announced plans to run against Texas Attorney General Ken Paxton in the GOP primary.

Krause's letter also follows the passage of a controversial and disruptive state law championed by Republican Gov. Greg Abbott that purports to abolish the teaching of Critical Race Theory in public schools.

Among the books on a 16-page spreadsheet that accompanied Krause's letter are The Fight for LGBTQ+ Rights by Devlin Smith, Black Lives Matter: From Hashtag to the Streets by Artika R. Tyner and What Is the Black Lives Matter Movement? by Hedreich Nichols. The list of nearly 900 books also includes fiction titles such as Pulitzer Prize-winning novel The Confessions of Nat Turner by William Styron and Follow Your Arrow by Jessica Verdi, a young adult book dealing with themes related to sexual orientation.

In his letter, Krause gave no explanation for how he compiled the list, nor did he list specific districts from which he demanded his accounting.

In a statement released Tuesday, the Texas State Teachers Association said Krause's letter "smacks of a witch hunt." Further, the union added, no state law — not even the recently passed anti-Critical Race Theory legislation — gives him the authority make such a demand.

"Rep. Krause’s letter demanding that school superintendents provide him with lists of books dealing with certain subjects on their school bookshelves is disturbing and political overreach into the classroom," TSTA President Ovidia Molina added.

Krause's office was unavailable for comment at press time.

In his letter, Krause asks superintendents to share how many copies of each book their districts possesses and at what campus locations. He also asks them to identify how much the districts spent to buy the books.

Further, the letter asks superintendents to identify any other books or content in each district that deals with "human sexuality, sexually transmitted diseases, or human immunodeficiency virus (HIV) or acquired immune deficiency syndrome (AIDS), sexually explicit images, graphic presentations of sexual behavior that is in violation of the law ..." What's more, it demanded that they identify "material that might make students feel discomfort, guilt, anguish, or any other form of psychological distress because of their race or sex or convey that a student, by virtue of their race or sex, is inherently racist, sexist, or oppressive, whether consciously or unconsciously."

The letter gives superintendents until November 12 to comply with Krause's demands.

In its statement, the TSTA accused the lawmaker of harming students' educations in a bid to bolster his political career.

In a statement to the Texas Tribune last month, Krause said he's running for Texas Attorney General as a “faithful conservative fighter” whose ideologies are in lock-step with Paxton's — minus the current AG's legal baggage. The lawmaker describes himself on his Twitter account as a "Christian, Husband, Father, Conservative & Republican."

"This is an obvious attack on diversity and an attempt to score political points at the expense of our children’s education," TSTA's Molina said. "What will Rep. Krause propose next? Burning books he and a handful of parents find objectionable?"