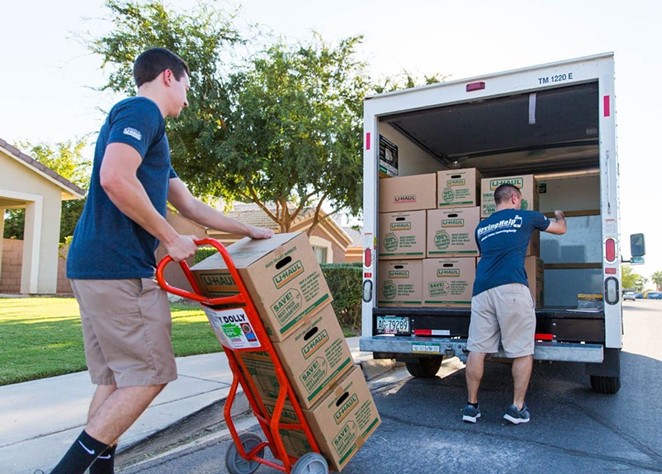 Instagram / uhaul
According to the 2021 U.S. Census, Texas is the fastest growing state in the country.
During a recent campaign stop in Houston, Gov. Greg Abbott told the crowd that migration into Texas has increased so much that California has “run out of U-Haul moving trailers.”

The Republican governor was referencing a study conducted by the moving company, which found that most people who rented moving trucks from U-Haul had gone to Texas last year. Again referencing U-Haul’s report, Abbott recently tweeted that “people are choosing Texas because we believe in less government, low taxes, and more freedom.”

But experts say the real reason why people are moving to the Lone Star State is far more complex.

Texas welcomed more than 300,000 people last year alone, making it the fastest-growing state in the country, according to the 2021 U.S. Census. And both Republican lawmakers and conservative pundits claim that a hunger for personal freedom is driving the Great Texas Migration.

But, as reported previously by the Current, the Lone Star State isn’t the rugged, freedom-loving and hyper-individualistic state some claim. Indeed, Texas ranked 49th for personal freedoms on the “Freedom in the 50 States” report published by the Libertarian-leaning Cato Institute. The analysis cited Texas’ high incarceration rate, strict marijuana laws, strict gambling laws and near-total ban on abortion as reasons for the state’s abysmally low personal freedom score.

Ask Texas’ new residents and they’ll tell you that personal freedom wasn’t the primary driver of their relocations. Instead, many new Texans like Susan Coyne, a retired nurse who moved to Canyon Lake from San Diego in 2015, relocated not to seek the personal freedoms Abbott has touted on the campaign trail but economic freedom.

“California was taxing me to death,” Coyne said. “There’s a state income tax, and the property taxes are higher because the homes cost more. My first reason [for moving to Texas] was the affordability of housing. My second reason is the weather, and my third reason would be for more conservative politics.”

“It seems like the economic factors are the most primary concern for folks,” Sepulveda said. “When they’re making that decision to relocate to a state like Texas, they’re looking for a more affordable housing market, for better cost of living.”

According to Sepulveda’s research, most new residents are part of a “push and pull” effect. Most of our new neighbors are drawn to Texas because they’re employees at companies such as Tesla, Oracle or Charles Schwab, which relocated their corporate offices to Texas, or they’re like Coyne and were priced out of a coastal city.

“If you are a Republican, you want to believe the few Republicans in California are tired of that place, and they’re coming to Texas to be with their brethren,” Sepulveda said. “What we’ve been doing is really not primary research, but a collection of surveys and some other pieces, and it’s almost 50-50 in terms of what some of those surveys are showing in terms of the type of politics that people are bringing and the reasons they’re moving.”

Whatever the new migrants’ motivations, the Great Texas Migration doesn’t show signs of stopping anytime soon, especially in the Alamo City. Last month, San Antonio was listed as 2022’s fourth hottest real estate market in the country by Zillow, and the bedroom community of New Braunfels was listed as one of the United States’ most desirable neighborhoods last week by OpenDoor.

But Texas’ brisk growth is causing a host of problems for longtime residents. The average rent price in San Antonio soared 30% in 2021, and the city’s cost of living skyrocketed 17% between 2010 and 2020, according to Census data.

Sepulveda expects this trend to continue as more jobs move online, encouraging young professionals to move to more affordable markets in warmer climates. Closer to home, residents being priced out of Austin may opt for living in San Antonio and commute north on I-35 for work.

“The new twist is that people can work from anywhere, so I think there’s going to be interesting patterns in migration moving forward,” Sepulveda said. “And with the traffic and everything getting worse in Austin, you could see more people moving to San Antonio and working in Austin.”