Timeless Traditions: A New, but Familiar Steward for the Guadalupe’s Gran Tamalada

That’s how Dr. Elle n Riojas Clark describes the quantity of rich corn goodness that is required for the she’s hosted over the years, those at her home and those she’s done for various nonprofits, including La Gran Tamalada at the Guadalupe Cultural Arts Center.

There’ll be 125 pounds of masa ready to go at the Guadalupe next month when Clark, San Antonio’s Gran Tamalera, hands over the demonstration to the Cortez family, owners of the Mi Tierra restaurants.

Clark, professor emerita of studies at UTSA, started the as a teaching tool.

“Cuisine is an important cultural teaching tool,” Clark said. “To eat a tamale, you’re eating something with a recipe hundreds and hundreds of years old and the recipe pretty much stayed the same. It gives you a deeper understanding.”

(Clark, like many San Antonians, freely code-switches between the Spanish tamal and the English tamale.)

The recipe, she says, is simple.

“The recipe is the flavor you remember from your mother,” Clark said. “Your memory is the recipe.”

At La Gran Tamalada, participants will learn the basic steps, which can then be tweaked with seasonings until their tamales taste like home.

For basic pork tamales, Clark seasoning steamed and shredded pork meat with , garlic, onion and rehydrated and peeled ancho chile. Blend your masa and lard (you can acquire both from your friendly ) with a little salt. You’ll spread this on the — corn husks, which have been soaked overnight. For large quantities, this can be accomplished in the washing machine — just make sure you run a cycle through with vinegar first.


Enter the — the assembly party.

“Long story short, we have because it is a big job,” Clark said. “I don’t know if anything else requires a group of people like that to be made.”

Clark is living proof that one can learn this craft. Her mom didn’t make tamales when she was growing up. But that didn’t stop her from learning from her aunts as an adult and hosting huge in her home each year. Her friends and family members would gather, around the holidays as so many do in San Antonio, to make tamales and indulge in the fellowship — family stories, and gossip. So when she teaches the art of tamales, she tries to emphasize this process as much as the product.

“A family will be talking, conversing and collaboratively making a dish,” Clark said. “It’s a family event. That’s the most important thing: to give value to your own experiences and your family’s cultural history you didn’t know.”
From these large she hosted in her own home, the first Gran Tamalada at the Guadalupe was born eight years ago. Clark was serving on the board of the Guadalupe at the and saw it as a natural Christmas gift to the community. Guadalupe education director Belinda Menchaca, who has been on staff for 23 years, said it’s always been a perfect fit.

“Guadalupe is all about preserving and promoting our culture and keeping traditions alive,” Menchaca said. “What better way than learning the history of the and getting to make tamales?”

Within a couple of years, Clark had brought on her dear friend, 2015 Poet Laureate of Texas, Dr. Carmen Tafolla, to help with the at the Guadalupe. Tafolla wrote a skit that children from Grupo Animo will perform during the .

“What’s unique about The Gran Tamalada is like Ellen Clark and Carmen Tafolla are here to share stories and anecdotes about tamales and information in a very enjoyable way,” Menchaca said.

The two would go on to write a book about the cultural significance of the tamal: Tamales, Comadres, and the Meaning of Civilization (Wings Press, 2011). Clark said that people have told her they even read from the book at their own . 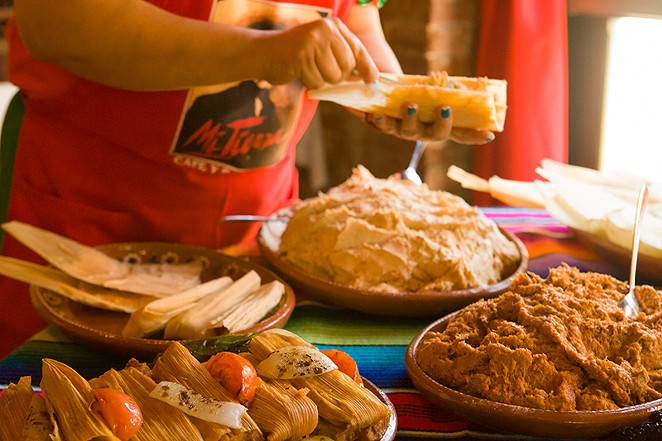 Dan Payton
“They’re teaching,” Clark said. “That is something totally new. Maybe their cultural memories aren’t robust enough and the book fleshes them out.”

It’s that same candor, that storytelling, that commitment to cultural identity through cultural history that brings the people in at her . Now capped at about 300 participants each year, the event hosts people from all over the region. They come from all over San Antonio and as far as Austin, all and ethnicities, to hear the stories and learn how to make tamales.

Clark says there is a renewed interest among the younger generation.

“I think there’s a resurgence,” she said. “People are at least trying. People will come and say ‘We haven’t had one since my mother died. Let’s have them again.’”

Research indicates that cultural revitalization occurs in the third and fourth generation after immigration, Clark said, so it doesn’t surprise her to see the younger crowd filing into the Guadalupe each year.

Two years ago, Clark invited Cariño Cortez, the third generation of Cortez family in the Mi Tierra business, to assist with the . Cortez, who studied at the Culinary Institute of America-Hyde Park in New York and worked under chef Rick Bayless in Chicago, had just returned to San Antonio when Clark asked her to help.
“She is a chef,” Clark said. “She’s trained and has skills and ability, but it’s also in her corazón.”

Cortez assisted the for the last two years, as she also prepared to open the family’s latest restaurant endeavor, Viva Villa Taquería. Located around the corner from Mi Tierra in Market Square, Viva Villa opened October and is the family’s fourth restaurant in their nearly 75-year history.

“Our restaurants are more than restaurants,” Cortez said. “We are teaching people about culture and hospitality.”
Cortez plans to have her parents, uncle, nieces and nephews all around the table as they show the art of making tamales next month. Clark and Tafolla will be present as well to pass the torch and be the in the room.
“It makes sense that our pass it on not just to Cariño but to the Cortez family, who support not just culinary endeavors, but also artists and cultural events like this,” Menchaca said.

La Gran Tamalada will take place on December 12 at the Guadalupe Theater, 1301 Guadalupe St., from 11 a.m. to 1 p.m. The free event is open to the first 300 participants. At the , each guest will get to make and take home a pair of pork tamales. Participants are encouraged to bring their own aprons. They will also receive a recipe book courtesy of sponsor AARP.

“It’s a lasting impression for their kids, a lasting food memory,” Cortez said. “Whether Hispanic or not, it’s a great tradition to pass on.”

Caption: Think about the cultural heft of the next time your ask you when you’re getting married and you’re elbows-deep in some bright orange .