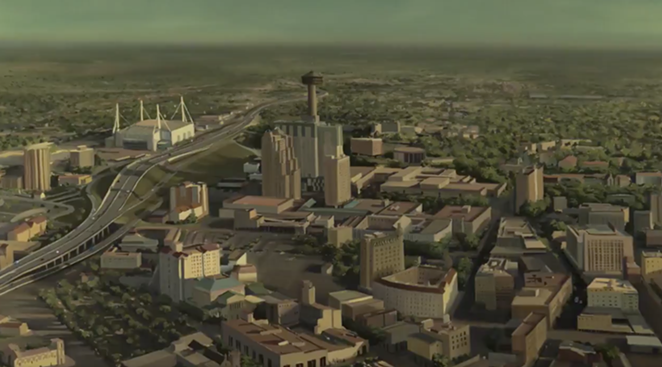 The new teaser opens with an overhead shot of San Antonio's downtown skyline, before cutting to Alma (Rosa Salazar) whizzing through the city streets. After she nearly dies in an ensuing car crash, her world unfolds – a modern Billy Pilgrim, she has "come unstuck in time." Her consciousness becomes unmoored from day-to-day reality, guided by visions of her late father, Jacob (Bob Odenkirk), who died when she was child.

One moment can change a life. Watch this exclusive #SDCC teaser for our new original series, #Undone. Coming soon. pic.twitter.com/D7vKGvdnY0

Created by the producers of Netflix's Bojack Horseman, the show is the first television production to use rotoscope animation for the entirety of an ongoing series. To accomplish this, director Hisko Hulsing tapped Austin animation studio Minnow Mountain, which previously worked on Richard Linklater's A Scanner Darkly and Keith Maitland's 2016 documentary Tower.

It's not often that our fair city gets more than a passing mention on film and TV (with some notable exceptions), and lately our only claim to fame has been Texicanas, one of Bravo's catty reality TV spinoffs. Undone's trippy, genre-defying style is certainly a breath of fresh air, and a chance to show the full breadth of what the city can offer.

Undone will premiere on Amazon Prime Video later this year.