The Spurs want to remove themselves from NBA limbo and start from the ground up after trading Murray. 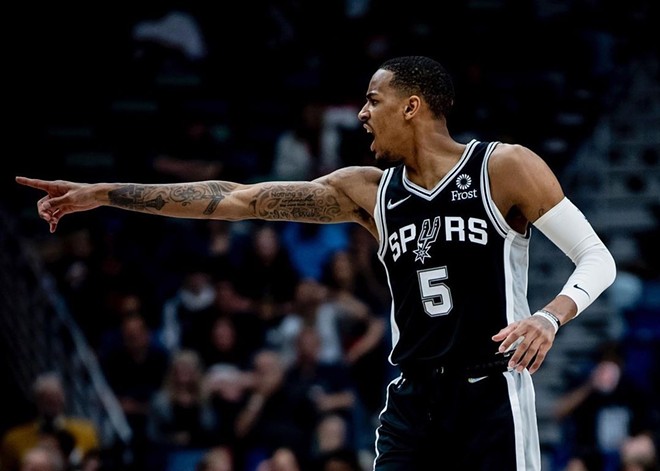 Instagram / @Spurs
If the Spurs were going to get the most in trade for Dejounte Murray, now was the time to act.
Many Spurs fans howled in despair as news broke Wednesday that the team had dealt Dejounte Murray to the Atlanta Hawks in exchange for Danilo Gallinari, three first-round picks and a future pick swap.

What's clear is that Spurs General Manager Brian Wright and the rest of the franchise are looking to rebuild from the ground up — even if it means jettisoning Murray, a two-way All Star, to do so.

Emotions ran high across Twitter in the aftermath of the trade, and rightfully so. Murray had woven himself into the fabric of the organization and embraced the culture of Spurs Basketball since he was a rookie. He excelled under the tutelage of Manu Ginobili, Tony Parker and, most of all, Coach Gregg Popovich.

Spurs fans were able to see the progression of Murray — the 29th pick in the 2016 draft — as he became an NBA steals leader this year. He also averaged career highs in points, rebounds and assists.

Even the point guard's farewell tweet to San Antonio embodied the kind of class and dedication he brought to the team.


SAN ANTONIO I LOVE YOU FOREVER…..🖤 Thank You @spurs And The Whole City For Believing In Me And Embracing Me From DAY ONE. I Want To Write A Whole Book But It’s Not Easy. We Are Family And Its Always Going To Be Bigger Than Basketball!!! pic.twitter.com/wMrmZanTbj

It might feel natural for Spurs fans to despair knowing Murray won’t be wearing the silver and black next season. However, the upside is that this may be the Spurs' best chance to benefit by trading their star player. His stock is at an all-time high.

Murray and his agent, Rich Paul of Klutch Sports, informed the team he wouldn’t sign an extension this summer, so making a move at this time makes sense, especially if something favorable was on the table in exchange.

In today's NBA, being able to win big in the draft means having the worst record in the league. So, let the race to the prized bottom begin.

Backlash from this deal is probably inevitable, but Spurs fans should ask themselves this: Is being perpetually stuck in the middle worth it?

The team wasn't likely to excel in the competitive Western Conference over the next two years of Murray’s contract. Cultivating low-win seasons to land higher draft picks may be the only way to rope in a future star.


Times are changing, and to survive in today’s NBA, teams must adapt to the nuances of rebuilding — even if that means starting from the ground up. These aren't the old days anymore. The Big Three are no longer here. The infamous Kawhi era has passed. Now, Murray too has come and gone.

We'll miss Murray, but it’s the dawn of a new day for the San Antonio Spurs, a team fully committed to the unpredictability of today's NBA.