The annual nationwide contest lets high school students customize Vans kicks around specific themes and have the chance to win cash for their school's art programs. The themes for the 2021 installment are Hometown Pride and Head in the Clouds. 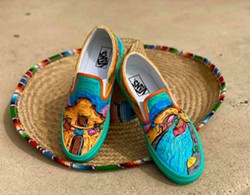 The Edison student's creation is now in the second phase of the contest, where designs from 250 schools — some with teams of up to 20 students — get the chance to recreate their digital submissions on real-life Vans.

“I've experimented with a lot of mediums, but you could say I know my way around acrylic paint. ... I'm just really excited and grateful to have had the opportunity to create something for this contest,” Zamarripa told the Current. “It's just all so exciting! And if I make it to the next step, then I'll have the opportunity to get votes from all over the nation, so I'll need San Antonio's help to get me into the top five.”

That "next step" will be the third round of the contest, which pits the top 50 designs — as chosen by Vans — against each other in a nationwide public vote. Voting will begin April 26, and the top five designs and grand prize winner will be announced at the end of May.