Lasting Impressions: San Antonio's arts community weighs in on the highlights of 2022

Crowd pleasing exhibitions and events as well as lesser-known gems made an impact on local art scene movers and shakers. 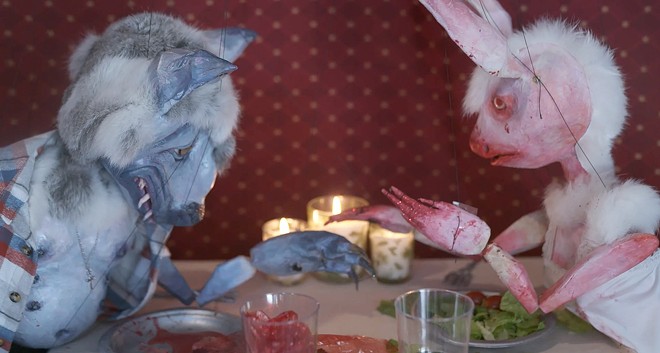 With the end of the year swiftly approaching, we reached out to San Antonio art scene movers and shakers to ask them which exhibitions or events made the biggest impressions on them in 2022.

In addition to focusing on the local landscape, we asked each to avoid their own programming and highlight others in the community. While that parameter produced repeat nods to crowd pleasers, it also resulted in shout-outs to lesser-known gems — not to mention inevitable omissions of important shows the Current covered this year.

Seeing Elyse Gonzalez, a native Houstonian and Ruby City Executive Director interview fellow Houstonian Rick Lowe, artist and founder of Project Row Houses at the Carver Community Cultural Center was a treat. Hearing Gonzales ask all the right questions of such an important and influential artist and seeing images of the process and projects gave deep background and understanding of how Ruby City came to place Lowe's painting, Untitled, 2021 in their collection. I value San Antonio's arts organizations especially after a very tenuous two-year pandemic. The Carver Community Cultural Center and Cassandra Parker-Nowicki hosted a wonderful event that gathered people together to have an amazing experience and allowed them to feel normal again.

I saw so many beautiful and amazing exhibitions in 2022.  I absolutely loved every piece of work in Red Dot at the Contemporary at Blue Star Arts Complex.  My favorite exhibition this year was "What Lasts" featuring Hilary Rochow and Alyssa Richards at FL! GHT Gallery. Alyssa's work evoked childhood memories from within, taking me back home to Brooklyn. Her wonderfully installed wall of teardrops held pieces of wallpaper from family members' gone but not forgotten. Maybe it's the reality that my grandmother's mind is now hostage to dementia and no longer remembers me, her first grandchild, or the emotional anxiety-ridden almost three years that Alyssa captured within me as I took in the exhibition. One of my highlights for 2022 would have to be the "Status of Women in San Antonio" exhibition at the Plaza de Armas. I thought it showcased the critical findings outlined in the 2019 Status of Women in San Antonio Report in a successful, thought-provoking and important way. Not typically do serious, data-laden studies get an opportunity to be interpreted in newly commissioned work for a gallery presentation, and the 15 women artists who were included in the show are some of our city's best.

[I] found the exhibition back in April held in the former Terminal 136 space at Blue Star Arts Complex, "Chavez & Danna & Datchuk & Fox & Gilmore & Morros & Perez & Rowe" (showcasing work that was originally intended for the "8 Create [SATX]" show at the McNay), left the biggest impression on me. Sarah Fox's Bad Bunny Gets Lucky stood out to me and was enticing, colorful, entertaining, edgy and bold. I feel that not only the work was impactful but also how things played out with the McNay attempting to censor the work and Blue Star Arts Complex offering a platform to showcase said work. Very reminiscent of how the space we now know as Contemporary at Blue Star came to be.

The exhibition that made the biggest impression on me this last year was a pop-up called "DNA" by Verena Gaudy and Martín C. Rodríguez in the empty space at Blue Star that is next door to Slab Cinema. Not expecting to see any more art, I stumbled into it accidentally on my way home from the gallery one night and was so glad I did. I felt it was a highly original use of space and materials (I'll never look at a laser level in the same way again), and it felt transcendental to walk through it even after a long night of gallery-sitting. Pop-up experiences like that in our local spaces have always been part of what makes San Antonio's art-making community special.

[If] I have to choose one, I'd say visiting The Cheech Marin Center for Chicano Art, Culture & Industry in Riverside, California. To recall when this was just an idea, follow the journey and see it come to life is a moment for the books in art history. Walking the galleries and recognizing artwork by friends, colleagues, artists who are no longer with us — from Los Angeles and so many from San Antonio — solidified the fact that art can be criticized, censored or deemed unworthy at one point in history but can and will be recognized and celebrated at another time. My takeaway for all artists is that their time is yet to come, so keep going.

In a year of many proud moments to call San Antonio home, "Wendy Red Star: A Scratch on the Earth" at SAMA was a hands-down highlight. Through 40 show-stopping works created over 12 years and across various mediums, the artist reframed for me, again and again, the possibilities of identity-making through American art. But it's Wendy Red Star's newest work — an immersive video screened inside her own, recently constructed sweat lodge — that anchored the overall experience that stays with me today. I left that exhibition changed, and I'm so grateful to SAMA for bringing her vision to San Antonio.

Sealia's pick was "Mould" at Rojo Gallery. A print group show, this was one of my highlights of 2022. This is where I got to see Abby Billingsley and Walden Booker make their curatorial debut. "Mould" showcased a refreshing medley of San Antonio artists and was hosted at one of my favorite galleries, Rojo Gallery. I've always been such a fan of group shows; this exhibition was precise and well done! Crisa's pick was the "Status of Women in San Antonio" exhibition at Plaza de Armas. This was such a powerful show that I think was so extremely necessary for the city of San Antonio to have. Viewers got to engage in the experiences and perspectives of a diverse group of women who made art based on the findings of a 2019 report about the status of women in our city. I was lucky enough to attend the artist panel for this one, and it was extremely moving, and some of what the artists said will stick with me forever.

"Wendy Red Star: A Scratch on the Earth" at SAMA was a show I really enjoyed (along with the current exhibit "Traitor, Survivor, Icon: The Legacy of La Malinche"). I so appreciated being able to see so much of her work that I had only ever seen in reproduction, except for a few of the photographs. It was terrific to be able to see such a wealth of her work in one place, and to understand the deep, multi-layered connections embedded in the work that tied to her indigenous background and culture, but also to understand the ... historical, and even historiographical, connections she's referencing. I was so happy that show came to San Antonio ....

I have to say that it was "Traitor, Survivor, Icon: The Legacy of La Malinche" exhibit at the San Antonio Museum of Art. I love the curators' focus on tackling such a controversial major feminine icon like La Malinche. The public is able to get a more informed opinion of who La Malinche was and how she has been portrayed for centuries. I love how the narrative changes around the mid-20th century and the most refreshing aspect is seeing the works of Latino/a/x artists like Delilah Montoya and Santa Barraza that brought a feminist perspective and a more complete visual exploration of the way she has been depicted and by whom.

The SAMA acquisitions of local artists. Particularly the Joe Harjo piece that is a collection of Pendleton blankets folded (military funerary style) and framed in the form of a crucifix. Ethel Shipton's solo show in Laredo! Jad Fair (one half of Half Japanese) at SpaceC7. What an incredible network of artists that Jeff Wheeler is always bringing to Sam Antonio! And super excited to get back to town to see the new installation of works at Ruby City!

When I was still a new San Antonian (I'm now coming up on my one-year anniversary), I visited Centro de Artes' winter show on the NYFA Immigrant Artist Mentoring Program, Round 2. I was wowed: the program pairs emerging foreign-born or first-generation artists with 34 different San Antonio artists for mentorship and development. The quality of the work was high; the community spirit and support that registered throughout the space was palpable; and it gave me great insight into the beating heart of San Antonio's arts community. Not least, the space is incredible and beautifully accommodates big and bold work as well as offerings that are small in scale. It was a great welcome to my new city.

The local show that made the biggest impression on me in 2022 was the McNay Art Museum's presentation of "Wayne Thiebaud 100: Paintings, Prints, and Drawings." This timely exhibition was an unprecedented look into his complete and masterful oeuvre. It proved his mastery of many techniques while perhaps teaching the casual art observer that he was much more than just the pie artist. And then, when he left us on Christmas Day [2021] while the show was up, it became the only place in the world where one could go to pay their respects surrounded by such a beautiful and impactful body of work. It was inspiring, and I will always be glad to have had the chance to say goodbye to one of my all-time favorite artists in such a spectacular way.