Jessica Elizarraras
I’ll be brief: Clementine is the most exciting restaurant in San Antonio right now.

I’m not trying to discount its peers in the realm of chill fine dining, but this small, 50-seat restaurant is reinvigorating the scene with new dishes, refreshing takes on standard fare and expert service.

Opened by chefs John and Elise Russ, Clementine was inspired by a clementine tree growing out of a crack in the parking lot of a potential restaurant space the Russ’ looked at. The couple first met in St. Michaels, Maryland, while working at The Inn at Perry Cabin. Elise’s father served as general manager, John was executive sous chef and Elise was pastry chef. “I would say we didn’t get along,” she said.

But the water v. vinegar tension soon wore off over a few Dark ‘N’ Stormy cocktails, and the couple eventually landed in San Antonio for John’s job as the second executive chef at Lüke Riverwalk. John’s tenure with the John Besh Restaurant Group ended in November 2016, and in the subsequent year, the chef continued popping up at occasional Dorcol Distilling beer releases and seated dinners at Sichuan House.

From the looks and tastes of the Clementine menu, John spent the last year fine-tuning the restaurant’s concept of “seasonal Southern and American eats.”
Don’t visit Clementine expecting fried chicken or a burger or collard greens. Visit for some of the city’s best vegetable dishes (Fun fact: Elise is vegetarian, so John has had some practice). Start with the white mushroom salad with extra virgin olive oil, Valley Citrus, parsley, pecorino and pomegranate seeds. It’s rich, textured, and a new way to convert mushroom-averse eaters. 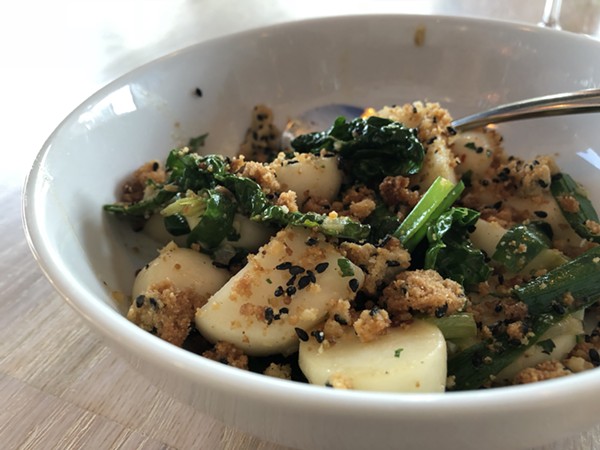 Jessica Elizarraras
This is where I implore you to spring for the “Feed Me” option, which asks the diner to “entrust Chef Russ with your dining experience, he and his team will create a menu especially for you highlighting the flavors of the season. Starting at $48 per guest (based on entire table participation).”

If you’re familiar with John and his cooking or open to anything, by all means let go of the reins. Chef does look in periodically during the “Feed Me” meals to check satisfaction levels, and the option does offer items not found on the menu (i.e. the fried oysters during our last visit) and a delicate sardine dish that’ll make you rethink any distaste for the maligned little fish.

However, for first-timers at Clementine, I strongly suggest getting to know the menu on a smaller basis. Tackle a few items first, or maybe stop in for lunch (and definitely get the buttery artichoke and unconventional but oh-so-delicious “tuna salad”).

“The Best Parts” are Elise’s forte as the former Biga on the Banks pastry chef delivers cardamom donuts (in earlier menus) and, most recently, fried strawberry pies, plated exquisitely with crème fraiche ice cream, macerated berries and freshly fried hand pies that served as the perfect ending to our meal.

Don’t skip the accessible wine list, and don’t forget to take in your surroundings that combine touches of citrus with subdued blue hues and an open kitchen — not bad for a former IHOP Express.

Clementine
The Skinny: After a career with the John Besh Restaurant Group, chef John Russ teams up with wife/pastry chef Elise to create San Antonio’s most exciting restaurant.
Best Bets: The Feed Me option in which chef takes you on a whirlwind tour of flavors until you say uncle.
Hours: 11:30am-2pm Tue-Fri; 5-9pm Tue-Thu; 5-10 Fri-Sat; closed Sunday-Monday
Cost: $8-$34 dinner

13 articles
So many restaurants, so little time. Find out the latest San Antonio dining news with our Flavor Friday Newsletter.