This week's live music options are almost as hot as the weather outside. 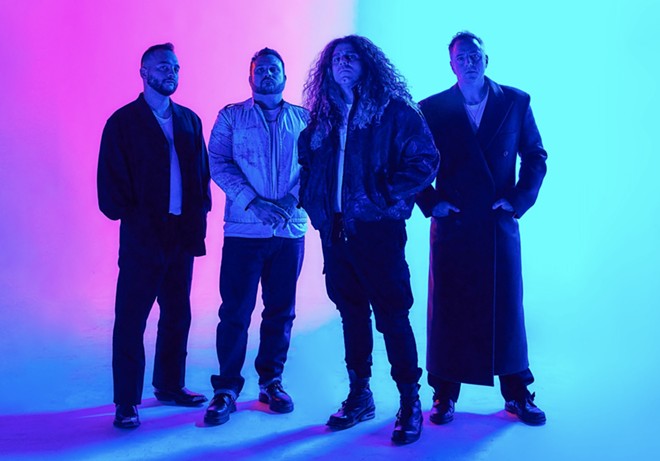 Alexandra Gavillet
Coheed and Cambria is joined on the bill by Alkaline Trio and Mothica.

It's a torrid San Antonio summer — and we're just talking about the temperatures. As evidenced by this week's glut of varied shows, it's a hot time to catch live music.

Soulful singer Bonner Rhae performs originals and covers, accompanying herself on acoustic guitar. Yes, that means you're in for a night of slow, country-tinged music from the Houston-based performer, who got her start performing at church. $7-$40, 8 p.m., Sam's Burger Joint, 330 E. Grayson St., (210) 223-2830, samsburgerjoint.com. — Brianna Espinoza

Though they emerged from Mexico as a part of the Avanzada Regia movement nearly three decades ago, Inspector is still going strong with a mix of ska and '60s rock 'n' roll spirit. The band's 2009 self-titled LP even included a cover of "Our House," Madness's ska classic. Elefante takes more of an alt-rock approach and had early brushes with fame opening for Shakira and Maná in the 2000s. $45-$70, 9 p.m., The Rock Box, 1223 E. Houston St., (210) 255-3833, therockboxsa.com. — Mike McMahan

Note that there's no mention of the Beach Boys or Trump fundraisers in relation to this show. That's because we're talking about a different Mike Love. And, yes, we're sure he gets this all the time. This Mike Love hails from Hawaii, where there are beaches as well as boys. But rather than surf rock, he focuses on acoustic guitar music that, while rooted in reggae, pulls from genres ranging from flamenco to soul to classic rock. Appropriate to his style and general vibe, Love is active in the fight for animal rights and environmental reform. $15-$70, 8:30 p.m., Sam's Burger Joint, 330 E. Grayson St., (210) 223-2830, samsburgerjoint.com. — MM

These screamo boys from North Carolina are carrying on the legacy of their 2000s-era flippy hair days with earnest songs about lost love. These days, the band leans more toward a post-hardcore sound, but expect the high-pitched vocals and pop hooks older emo fans are likely to eat up. $25-$30, 7 p.m., Paper Tiger, 2410 N. St. Mary's St., papertigersatx.com. — BE

Gary P. Nunn is considered a pioneer of the progressive country scene that started in Austin in the early 1970s, and he's carried the torch for decades, releasing acclaimed albums on his own label. The singer-songwriter has seen trends come and go, sharing stages with many of the greats while cementing his own legacy as one himself. $25, 8 p.m. Friday, 9 p.m. Saturday, Gruene Hall, 1281 Gruene Road, (877) 856-0806, gruenehall.com. — Enrique Bonilla

Cult rockers Coheed and Cambria — creators of some of the longest album titles in history — are touring in support of their most adventurous LP in years, Vaxis — Act II: A Window of the Waking Mind. The band turned heads two decades ago by pioneering a sound that pulled from post-hardcore and prog rock, two genres that previously seemed diametrically opposed. Since then, frontman Claudio Sanchez has devoted most of the band's material to developing the Amory Wars, a Star Wars-length saga that inspires the band's lyrics, sung in his signature high-pitched vocal style. $46-$146, 6:30 p.m., Whitewater Amphitheater, 11860 FM 306, New Braunfels, (830) 964-3800, whitewaterrocks.com. — MM

After 12 years fronting the beloved Uncle Lucius, Kevin Galloway embarked on a solo career when the Austin-based band ended in 2018. His aptly named solo debut The Change introduced fans to his own Americana sound, which infuses soul elements with a Southern twang. It's lively enough to scoot a boot to but reserved enough to enjoy over a glass of bourbon. This show celebrates the release of Galloway's newest album, Secondhand Starlight. $15-$70, 9 p.m., Sam's Burger Joint, 330 E. Grayson St., (210) 223-2830, samsburgerjoint.com. — EB

While the band's name suggests forward momentum, Horse Jumper of Love's brand of indie-rock is so slow that it almost comes across as doomy. Although their brand of slowcore-influenced rock may not be for everybody, fans of the genre can appreciate its absorbing, almost hypnotic approach. $13, 7 p.m., Paper Tiger, 2410 N. St. Mary's St., papertigersatx.com. — BE