San Antonio's Upon a Burning Body is making a hometown pitstop in honor of its latest album Fury. 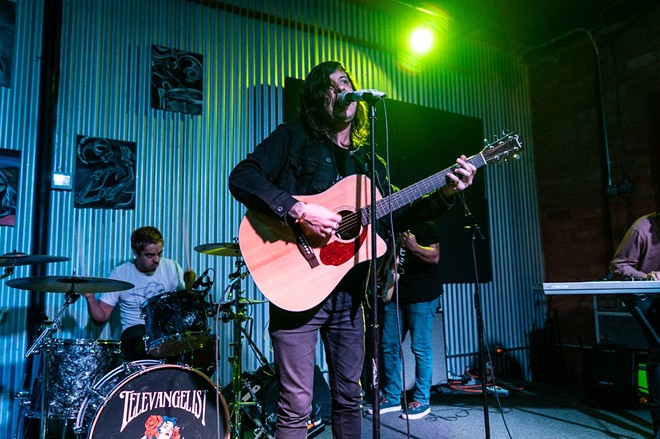 Jaime Monzon
In addition to being a solo performer, Donovan Melero also is the drummer and vocalist for post-hardcore band Hail the Sun.

The weeks between Thanksgiving and Christmas are typically slow when it comes to live music. Not so this week.

Hail the Sun frontman Donovan Melero is returning to SA as a solo artist, and rapper Rod Wave is bringing his melancholy rhymes to the AT&T Center. Influential Mexican band Zoé also will bring its intriguing mix of sounds to the Aztec Theatre, while SA hometown heroes Upon a Burning Body will rock Vibes Event Center.

And that's just the beginning. Let's dive in.

Critics have described Turnover with a laundry list of adjectives, including pop-punk, dream-pop and emo. Given that the Virginia Beach-based band once toured with New Found Glory, pop-punk seems like a decent enough fit. Even so, these guys have been doing it for more than a decade and their sound is much more refined than that descriptor might suggest. While arguably indie rock at its core, a lush veneer hangs over the music of Turnover, giving it a more ethereal quality than one might expect. $20-$25, 7 p.m., Paper Tiger, 2410 N. St. Mary's St., papertigersatx.com. — Mike McMahan

In addition to being a solo performer, Donovan Melero also is the drummer and vocalist for post-hardcore band Hail the Sun. Wait, you may be thinking, drummer and vocalist? Like Don Henley and Phil Collins? Well, maybe, if the Eagles and Genesis were prone to punishing math rock. For this appearance, though, Melero is strapping on a guitar and playing an acoustic set. Although his solo material is more rock-oriented, it's easy to hear how the songs could be stripped down. And he still sings with the passion you'd expect from a post-hardcore vocalist. In other words, you won't hear "Hotel California." $16-$18, 7 p.m., Vibes Underground, 1223 E. Houston St., (210) 255-3833, vibeseventcenter.com. — MM

After perfecting his downbeat approach to hip-hop over three albums starting with 2019's Ghetto Gospel, Rod Wave announced this summer that Beautiful Mind would be his last "sad-ass" album. The release debuted in August as a Billboard No. 1, making it his second chart-topper after 2021's SoulFly. The album features the successful singles "Alone" and "Stone Rolling." On the standout "Yungen," Rod Wave brings forth melancholy melodies over a lusciously layered track that also features trapper Jack Harlow. $49.50 and up, 8 p.m., AT&T Center, 1 AT&T Center Parkway, (210) 444-5000, attcenter.com. —Marco Aquino

Upon A Burning Body, Left to Suffer, The Dialectic

San Antonio's Upon a Burning Body is making a hometown pitstop in honor of its latest album Fury. After releasing its debut album in 2010, the band blew up internationally, grabbing recognition from all corners of the metal sphere. True to its South Texas roots, the all-Latino band blends cultural themes into its body-slamming songs, which include elements of both groove and deathcore. $20-$23, 7:30 p.m., Vibes Event Center, 1223 E. Houston St., (210) 255-3833, vibeseventcenter.com. — Brianna Espinoza

Covet, The Speed of Sound in Seawater, Their/They're/There

Math rock heroine Yvette Young leads Covet, a San Jose, California-based progressive rock trio. Young's parents, both musicians, had her playing piano at age 4 and violin at 7. She went on to earn a degree from UCLA while teaching herself how to play the guitar. Expect to year Young borrow from her classical training in her unique finger-tapped approach to the six-stringed instrument. Covet's 2020 release Technicolor features both sonically complex structures and off-kilter musical touches. The multi-talented Young also created the album's cover art and was featured as a spokesperson for Logitech in a 2021 Super Bowl commercial. $20-$23, 7:30 p.m., Paper Tiger, 2410 N. St. Mary's St., papertigersatx.com. — Danny Cervantes

Yes, Rick Cavender is that car dealer guy. But save your jokes — or maybe tell all your friends if you're funny — because he's also been a beloved San Antonio musical fixture for quite a while. For this gig, Cavender will be celebrating the release of the new album Glow of Christmas Cheer. His mix of vintage rock and classic country is so locally beloved that it makes him a popular act for numerous charity events and even earned him an opening slot with Glen Campbell. Sold out, 7 p.m., Tobin Center for the Performing Arts, 100 Auditorium Circle, (210) 223-8624, tobincenter.org. — MM