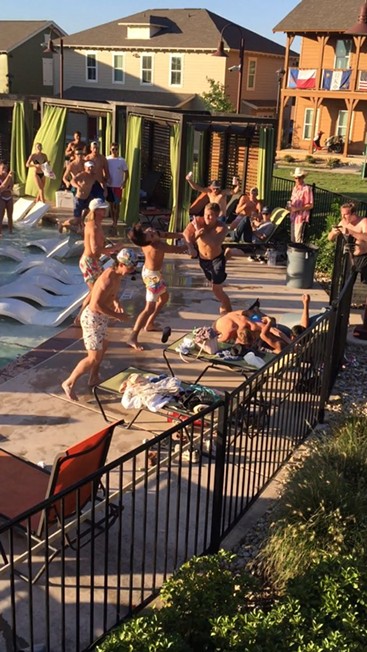 Two videos out of Texas, both of which quickly went viral, show the aftermath of two different pool parties. In one, a handful of angry bros throw a series of wild punches as the party devolves into an all-out dude-brawl. In the other, a bunch of kids are just standing around in a suburban neighborhood.

The partiers appear to be mostly white college students in one video; in the other, they're mostly black high school kids. One video shows officers responding by barrel-rolling through the scene, pointing a gun at unarmed teenagers, and slamming one bikini-clad girl face-down on the ground. The cops didn't even show up to the other scene. Take a wild guess which one.

As the Express-News first reported, Twitter user @WhiteBoy_Ejyay posted this video over the weekend of a fight that broke out during a pool party at Capstone Cottages, a student housing apartment complex in San Marcos just a couple miles from Texas State University. As least five people are seen getting in on the action, one punching a guy so hard he's knocked backwards into the pool as a group of students heckle and cheer them on.


According to the daily, the apartment complex wouldn't even acknowledge that the fight happened, but did say management was aware of the video. Evidently it wasn't that big of a deal — officials with the City of San Marcos say police were never even called out to the scene.

Which is a remarkably different response than that seen in another video of a Texas pool party that went viral last summer. Police were called to an upscale suburban neighborhood north of Dallas last June after neighbors complained of that a group of teenagers that had gathered for a pool party were causing a ruckus. No less than 12 McKinney police officers responded to confront the kids, most of whom were black. In that now-infamous video, Eric Casebolt is seen barrel-rolling through the scene as if he's in an action movie. He pins one 14-year-old bikini-clad girl to the ground, kneeling on her back before drawing his weapon on two more unarmed kids. Casebolt, who was ultimately cleared by a grand jury, left the department shortly after the incident.
In the aftermath of McKinney, many wondered whether latent racism was behind the heavy-handed response to what was, at worst, just a group of dumb, rowdy high school kids. Video of the San Marcos pool party fight begs the question of why everyone just shrugged it off.