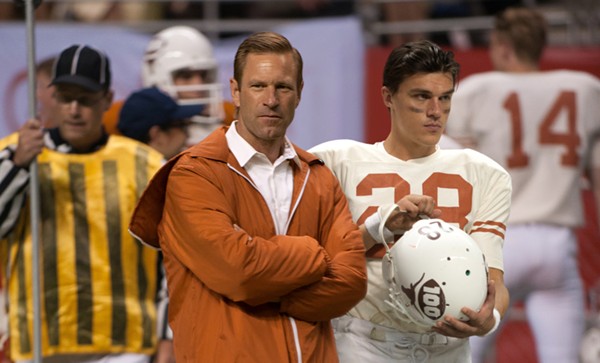 Aaron Eckhart
Aaron Eckhart plays the iconic UT football coach Darrell Royal in My All-American.
In the true-life sports drama My-All American, actor Aaron Eckhart (The Dark Knight) plays late UT football coach Darrell Royal, who won national championships with the Longhorns in 1963, 1969, and 1970. Part of the film covers the time when Royal recruited safety Freddie Steinmark, who, after playing in the 1969 “Game of the Century” against the Arkansas Razorbacks, found out he had a malignant bone tumor above his knee and had to get his leg amputated. Steinmark lost his battle with cancer in 1971 at the age of 22, but not before inspiring the U.S. Congress and President Richard Nixon to write the National Cancer Act of 1971 into law.

During an interview with the Current, Eckhart, 47, talked about what he learned playing the iconic UT coach, his thoughts on the passion of college football, and even chimed in on the excellence of the San Antonio Spurs, specifically future Hall of Famer Tim Duncan.


Describe what it was like to take on such an iconic sports figure as UT Coach Darrell Royal?
I knew nothing of the story of Coach Royal or Freddie Steinmark. I came into this completely clean. I got to know what he meant to the community and his players and what he meant to UT and to college football. He is the one that basically pioneered the triple option and the wishbone [formation]. I talked to everybody from [former UT coach] Mack Brown to [former pro cyclist] Lance Armstrong. Everybody came out of the woodwork to tell me a story about [Coach Royal]. I went out to dinner with [his wife] Edith. I did everything I could do to know who he was.

What impressed you the most about him?
He was a hard-nosed, tough-ass coach that wanted to get it right. He was meticulous. He had a work ethic. He was well mannered and expected his players to be well mannered and disciplined. He loved to win. At the same time, he was best friends with [musician] Willie Nelson and could be found on the weekends or during the week out at Willie’s place just listening to music. If you dig deep enough into any human being, you’ll find out that people can surprise you and are very interesting.

What does My All-American say about a player like Freddie Steinmark and what he endured in his short life?
Well, he was inspirational and optimistic and had a great spirit. He influenced everyone around him. He was an undersized kid that became the first out-of-state recruit for UT. He was never expected to play. I don’t even think Coach Royal expected him to play. Yet he fights his way onto the first team and becomes the inspiration of the defense. He did it with a smile on his face. He had his faith and did it in his own way. I think that’s to be respected.

What kind of athlete are you? Did you grow up admiring any of your coaches?
I grew up playing sports. I can remember my coaches from my earliest days. They always impressed me and always tried to teach me hard work and discipline. I think, if anything, it would be my dad who I’d say taught me work ethic and taught me how to do things right and to the best of my ability. Directors that I’ve worked with or producers or other actors are always instilling into me what it means to be a professional, which, in my opinion, is the highest compliment.

Could you feel during the making of this movie how big Texas football is?
You can see how big Texas football is if you go into the UT weight room. They have the most impressive weight room. It’s enormous with state-of-the-art equipment, locker rooms, and stadium. Just walking down the hall with [former UT football All-American] Jordan Shipley and listening to him explain to me about all the All-Americans and talking to former players and them telling me what the Game of the Century was like (Texas vs. Arkansas in 1969). I understand Texas football is king and that there are expectations with being the coach of a program at Texas. The same thing can be said of Louisiana and LSU. Plus, there’s all the money that’s involved in Texas football and the boosters and the faculty and the university. I found out there is a lot of pressure that comes with being a coach.

But if they’re good at it, coaches can become icons. What do you think when coaches are placed on such high pedestals for their success in the sport?
I think as soon as we put them on a pedestal, we find out they’re still human beings. I think football is important, but I think the life lessons learned in football are more important. I think, ultimately, they’re just coaches. They coach something we love. Now, I do think [athletes] are special people. There are only five quarterbacks in the world that can throw a football competently out of six billion people on Earth. Those are special people and they should be rewarded. I don’t think, however, we should idolize them to the point of deity.

Courtesy
Do you think winning is everything in sports?
If you’re paid to win football games than you should do whatever you can to win football games. Now, I don’t think winning trumps cheating. I think winning needs to be done honestly and fairly. I think there is still honor in defeat depending on how you played. But I do expect to win, yes. I think winning is the name of the game. I think everyone involved in the program should expect to win and should work to win. That’s where I think things get a little confused because people say, “Oh, you’re hurting the kids by playing them too hard or practicing them too hard.” I think anybody who signs up for it should know what they’re getting into and should expect to do the work to win. I do not think they should be criminalized if they don’t win.

What do you think about the fact that college football players are going to start getting paid?
Well, I understand that if someone is going to make money off of someone’s name, that they deserve a cut of that. I mean, heck I’m in the entertainment business. It’s something I know very well. However, I’d hate to see amateur sports go pro. I think there is way too much money in the game. That’s just life, but I think when you put money into the equation things change. I’m an old-school guy. I like hard-hitting football. I like giving the ball back to the ref after you score a touchdown and getting back to the game. But things have changed. I think people now are protecting a brand sometimes more so than actually playing football. But the results are there. All I have to do is not turn on the TV. Sometimes I don’t.

Do you think college football is a more passionate sport than pro-football?
I do. I think the players are still aspiring to get somewhere. They still want to get into the pros. They’re more willing to play a freer kind of football. They have more passion because there is more at stake. I think when you give pro football players a big contract they know they have to protect that contract and protect their bodies. So, I think overall the experience for me is better when I’m watching college than pro.

Who do you root for these days?
I’m an issues-based guy. I liked to watch the best. If I see Alabama going up against Florida State, I just like to see the top guys play. I went to Brigham Young, so I watch them. I watch the [Oakland] Raiders. I also like to watch Denver [Broncos] for [quarterback] Peyton [Manning] or New England for Tom Brady. I just like to watch excellence. 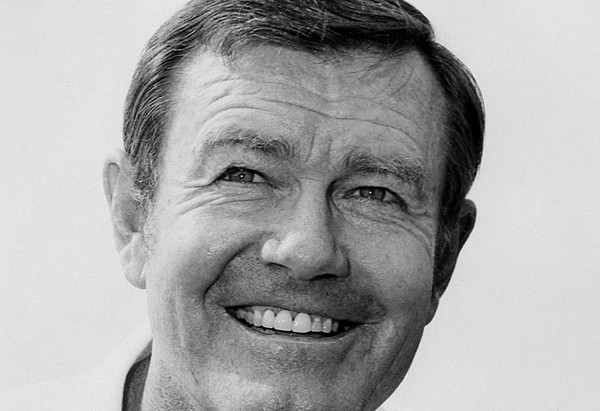 Wikimedia Commons
Aaron Eckhart plays legendary UT football coach Darrell Royal, who passed away in 2012 at the age of 88.
San Antonio knows a little about excellence in sports with the Spurs.
Well, yeah, the Spurs are what I’m talking about in terms of guys out there getting the job done. There’s not a lot of fanfare, but they are superb players. I think [Tim] Duncan epitomizes what I’m talking about. He’s a guy who is a Hall of Famer, Top Ten guy of all time, perhaps, who just gets it done. There’s not a lot of fanfare or talk. He inspires his teammates. He has respect for his coach. He listens to his coach and his coach listens to him. He’s got a big heart. I’m a big Duncan fan.

Some people might say “not a lot of fanfare” equals “boring.”
It doesn’t. I think that’s just something someone created. I think maybe the networks created it. I don’t equate that with boring at all. I think it’s just the opposite. I mean, I’m a big Kobe [Bryant] fan. The reason I’m a big Kobe fan is because he wants to win. He does everything to win. People call him a ball hog or whatever, but I just like guys who will push themselves beyond their limits to win the game. Duncan is one of those guys. Kobe. Dirk [Nowitzki]. I just like watching guys like that.

It’s going to be a tough final couple of years for Kobe on that current Lakers team if all he wants to do is win.
Well, Kobe can’t win it by himself. He’s hurt. I think the big knock on Kobe is his contract. If he were getting $5 million for coming back [instead of $48.5 million over two years], nobody would care. I have no doubt in my mind that Kobe wants to win and thinks he can win. I’ll tune in for that. I’d rather watch a hurt Kobe play or a hurt Michael Jordan or Kevin Durant than a guy that has it all, but he’s not willing to put it all out there and not running as hard as he can.

You don’t have to name any names, but have you run across actors in the industry that do their job half-assed like that?
Oh, yeah. (Laughs) Yeah. Look, there’s no difference between two.

Even when their paychecks are that huge?
Oh, yeah. (Laughs) Much more than I’m getting.

If you went out to play a game of pick-up football today and played wide receiver, what route would you run?
I would just go deep. (Laughs) I would run straight down the middle of the field to the goal post and then put up my arms.

Would you catch it?
Uh, yeah, I would. I’ve had a lot of quarterbacks throw me the ball. It’s not as easy as it looks, I’ll just say that.