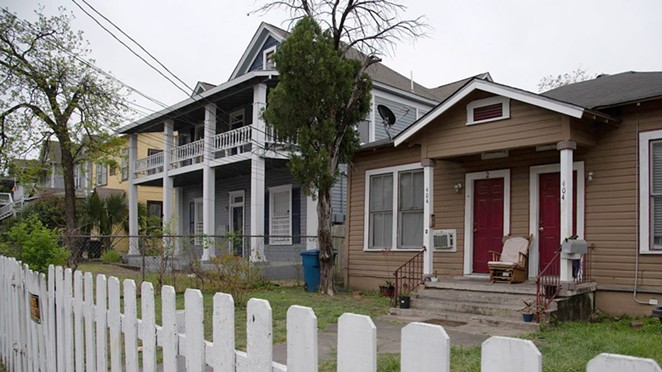 V. Finster / San Antonio Heron
Government Hill is one of the fastest-changing neighborhoods in the downtown area.
The Bexar Appraisal District wants to freeze property values, and therefore property taxes, amid the COVID-19 outbreak, but will first ask Gov. Greg Abbott for permission to do so.

The measure was discussed during an emergency meeting of the Bexar Appraisal District Board of Directors Friday morning. During the meeting, the board decided to delay in the mailing of 625,000 property appraisal notices to April 18 — a process that typically begins April 1 — in an effort to buy more time as the COVID-19 pandemic unfolds in San Antonio.

The board also decided to close the appraisal district’s offices to the public beginning Monday at the recommendation of Chief Appraiser Michael Amezquita, who said the building on North Frio Street sees between 1,200 to 1,500 tax payers a day this time of the year.

He said property owners still have the right to protest their values either by May 15 or 30 days after they receive the notice, and can do so mail, phone or electronically.

The delay gives the Bexar Appraisal District more time to figure out its actions going forward, said District 1 Councilman Roberto Treviño, who serves as the appraisal district board’s chairman. On Thursday, Metro Health reported the first community transmitted cases of COVID-19 in San Antonio—six of the total number of 29—meaning public health investigators couldn’t determine from where they contracted the disease.

The appraisal district board ultimately wants to roll over property values in Bexar County from 2019, which would essentially freeze property taxes for a year.

“We think it’s the most responsible thing to do in light on what’s going on,” Treviño said. There’s “so much stress on our community right now and we want to provide some level of certainty.”

Later today, the City of San Antonio and Bexar County will send a letter to Gov. Abbott, asking for permission to roll over valuations, a measure his office rebuked earlier this week when the Texas Association of Appraisal Districts requested the same thing. Amezquita’s understanding is that Mayor Ron Nirenberg and Judge Nelson Wolff will ask the mayors of the other municipalities in the county to also lobby Abbott.

During the meeting, Amezquita said he believes, under state law, he has the ability to roll over property values without approval from Abbott. 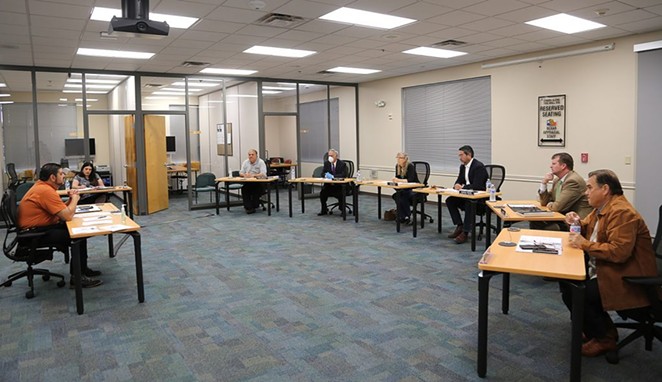 People would still have to pay property taxes, he said. And that they can — and should — still protest them. If a decision was made to roll over taxes, Amezquita said his office would simply not send out new notices.

“if I can avoid sending out 625,000 notices to a panicked community, I think that would be best,” Amezquita. “If I were a tax payer, which I am, I would think it would be insensitive, if not callous, if not irresponsible to send these out.”

Amezquita said property value rollover would not apply to new construction, properties that have a new owner and anything property that experiences a change positively or negatively for an exemption. He said he expects property values to increase across the county by an average of 7% to 8%.

Treviño said he wants to protect San Antonio renters during this time — which compose 47% of the population, according to a recent study of U.S. Bureau Census data by housing advocacy group Texas Housers. If property values remained the same, in theory, rents would remain the same. If property values increase, which the “vast majority” did this year, Amezquita said, rents would increase, too. Unless the owner of a property has a homestead exemption, which would require the owner live on the property, there is no cap for the percentage the valuation can increase year to year.

“Renters are subjected to the full onslaught (of the property tax increase),” Amezquita said.

The delay buys his staff more time to assess what a property value freeze would have on the various taxing entities, especially school districts.

During the meeting, Bexar County Tax Assessor-Collector Albert Uresti said a roll over may hurt those property owners who may see a decrease in the value of their homes and businesses because of the COVID-19 pandemic. Amezquita agreed that property values are likely to decline — in the second and third quarter of this year, he predicted — but those won’t affect this year’s tax rolls, because state law dictates properties must be assessed from Jan. 1.

The Bexar Appraisal District’s board’s next meeting is scheduled for April 8.

The San Antonio Heron is a nonprofit news organization that relies on support from readers like you. We accept donations via PayPal and Patreon (monthly only). All donors will be listed on our site.