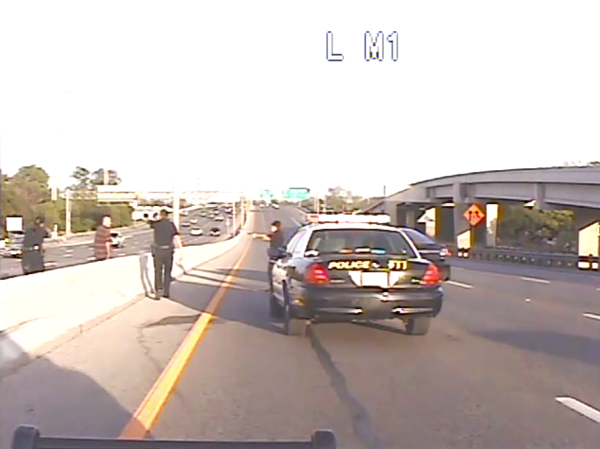 San Antonio Current
This screen grab from dash-cam footage provided to the San Antonio Current shows Jesse Aguirre, 38, moments before being taken into custody in April 2013 on U.S. 90.
The wife and son of a man who died while in police custody a little more than two years ago filed a lawsuit against the city and eight San Antonio Police Department officers.

Jesse Aguirre, 38, died in police custody on U.S. 90 after fleeing a one-vehicle wreck in excited delirium after his girlfriend decided to break up with him, according to police documents obtained by the San Antonio Current.

[Related Story: No, Thank You: SA Doesn't Want To Be The Next Ferguson]

At the time of his death, he was estranged from his wife, according to KSAT.

Authorities said Aguirre, who was high on cocaine and drunk, died from a heart attack.

But according to the lawsuit, he suffocated.

"While Mr. Aguirre was on the ground he made numerous cries for help and pleaded he could not breath," the complaint states. "The officers were deliberately indifferent to the fact that Mr. Aguirre was suffocating under the weight of the officers and in serious physical danger of asphyxiation based upon the positional restraints and body weight and force applied to him."

In reports, several police officers said Aguirre was resisting arrest. However, dash-cam video provided to the Current shows Aguirre walking away from three officers, two with guns drawn and another with a Taser. In the video, Aguirre stops to talk to police, who immediately handcuff him and flip him over a concrete barrier onto his head.

When police reached Aguirre on the highway, they immediately pulled out weapons and screamed obscenities at Aguirre and threatened to shoot him.

Eventually, police slam Aguirre face first into the highway and several police officers sit directly on top of him. According to the reports, he was actively resisting, but that's difficult to determine from the video.

WARNING: The following video depicts a man's death and may be disturbing to some readers.