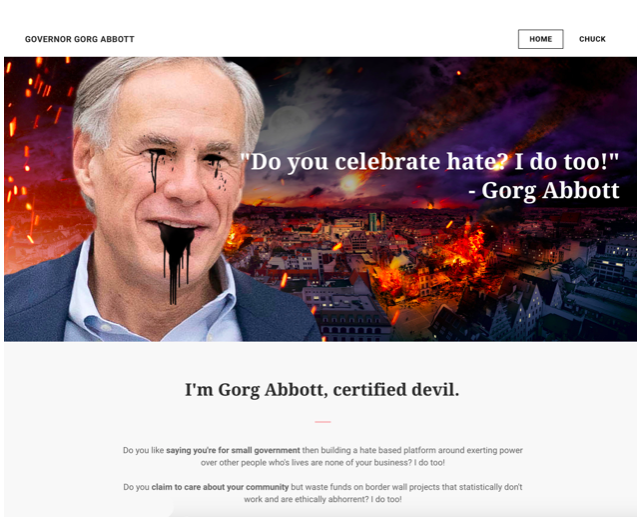 Grabbing web domain names one can use to embarrass one's political opponents has been going on since the late '90s. Which is why it's kinda inexplicable that Texas Gov. Greg Abbott's staff and campaign crew failed to secure GovernorAbbott.com.

Well, someone has now done that for the Republican governor and his not-ready-for-prime-time web helpers. And that someone is Chuck Tingle, the prolific author of a literal buttload of LGBTQ-friendly boner books including Space Raptor Butt Invasion, Scary Stories to Tingle Your Butt and Trans Wizard Harriet Borber and the Theater of Love.

It's easy to guess how Mr. Tingle feels about Abbott's recent letter demanding that Texas' child welfare officials treat gender-affirming health care as child abuse. Hint: Mr. Tingle recognizes it for the hate-mongering bullshit it is. Turns out, Mr. Tingle also isn't a fan of the gov's resource-wasting and civil rights-violating border crackdown either.

Earlier this week, Tingle tweeted out an announcement about the new page, which depicts Abbott with demonic black ooze dribbling down his chin and from his eyes. "dang. surprised nobody who works for greg abbott remembered to buy governorabbott.com," Tingle noted.


dang. surprised nobody who works for greg abbott remembered to buy https://t.co/GXnZnfLtRt pic.twitter.com/AheMQvidXA


Those who visit the new site are greeted by the same image. “I’m Gorg Abbott, certified devil,” the welcoming text reads. “Do you like saying you’re for small government then building a hate based platform around exerting power over other people whose lives are none of your business? I do too!”

A short FAQ section follows, which includes a single question: "What if I don't hate people who are different from me?"

"If you're not frothing at the mouth with belligerent hatred and ignorant bigotry, then maybe supporting Gorg Abbott isn't for you!" Tingle responds. "If something seems off about this website, it's possible you may actually be a decent human being!"

Tingle then urges visitors grossed out by Abbott's repeated efforts to punish transgender Texans, including children and their loving families, to donate to one of the following charities: