Executives of the electric vehicle venture are now facing a lawsuit from a former employer alleging them of property theft. 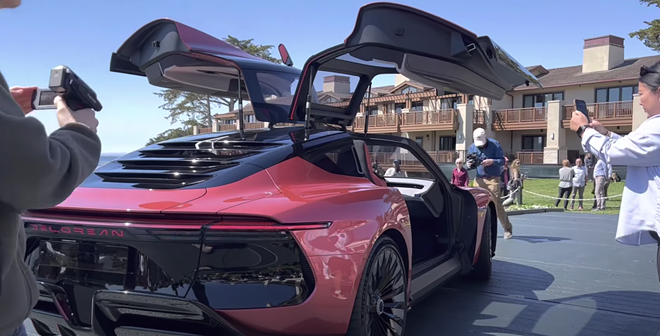 Youtube / cubeflame
According to DeLorean Motor Company CEO Joost de Vries, the Alpha 5 will retail for between $90,000 and $190,000, the Express-News reports.
San Antonio-based DeLorean Motor Co. unveiled a prototype of its Alpha 5 electric vehicle during a Thursday ceremony at the Pebble Beach Concourse d'Elegance auto show in Monterrey, Calif, according to media reports.

The exhibition of the Alpha 5 comes a week after the revamped DeLorean Motor Co. and its founders, including CEO Joost de Vries, were named as defendants in a lawsuit filed by Karma Automotive, a rival electric vehicle firm.

The suit alleges de Vries and other former Karma employees launched their redesign of the iconic '80s sports car featured the Back to the Future film franchise with intellectual property stolen from Karma.

In a statement to the Express-News, de Vries called Karma's accusations "baseless."

Amid great fanfare, the fire-orange Alpha 5 was driven onto a showcase platform with dramatic music playing in the background last week in Monterrey. Company execs say the new coupe will sell for $90,000-$190,000 and have a driving range of around 300 miles, reaching speeds of 155 mph, the Express-News reports.

De Vries previously said he expects the Alpha 5 to hit the market in 2024, with plans to contract a manufacturing plant in Ontario, Canada, to produce a "low volume" of the cars, according to the daily.

San Antonio and Bexar County doled some $1.1 million in grants and tax incentives to the DeLorean Motor Co. earlier this year. In exchange, the venture agreed to set up its headquarters in Alamo City, promising to hit the lofty goal of creating 450 jobs with an average salary of $145,600 by the end of 2026.

The unveiling also comes days after Kat DeLorean Seymour, John DeLorean's daughter, blasted the San Antonio company and hinted that she had her own relaunch in the pipeline.

In a June Instagram post, DeLorean Seymour made clear that the new DeLorean Motor Co. isn't associated with the DeLorean family and asked the EV automaker to "stop lying and stop speaking about John now, he despised you."

On Wednesday, DeLorean Seymour also appeared to hint that she and others related to John DeLorean are working on their own version of the distinctive '80s car.

"Join us as we build a car sent from an Angel to change the world," DeLorean Seymour wrote in a Wednesday Instagram post.

DeLorean Seymour's Instagram post was accompanied by a link to a Youtube video featuring conceptualize art of a "Model JZD" DeLorean, which the clip said is coming sometime in 2023.

The YouTube video notes that the clip is "NOT associated with DeLorean Motor Company or DeLorean Reimagined."