NEISD reviewed 431 books for appropriateness after a request from a far-right Texas lawmaker and ended up removing 119 of those. 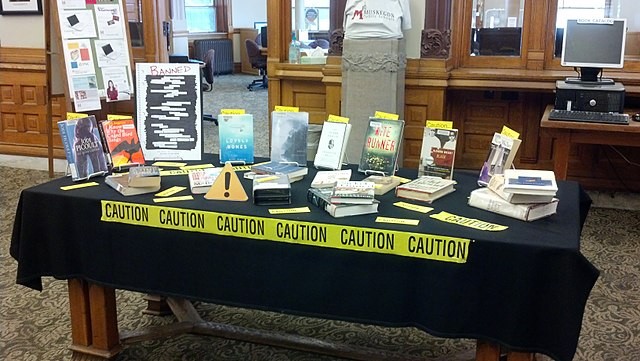 Wikipedia Commons / Charles Hackey
Some two-thirds of book reviews during the 2021-2022 school year took place after Texas Rep. Matt Krause demanded districts review books on a list of 850 titles he circulated.
San Antonio's North East Independent School District led the state in conducting reviews outside the regular process of whether to pull books from its shelves based on whether they're appropriate for students, a Hearst News investigation found.

NEISD — which drew criticism from both the ACLU and its own teacher's union for launching a controversial review of reading material late last year — also banned the most number of books, the analysis shows.

According to the report, NEISD reviewed 431 books for appropriateness and ended up removing 119 of those. The second most active district for reviews, Pasadena ISD near Houston, examined 348 books. Bryan ISD near College Station had the second-highest number of bans at 55.

No other San Antonio district was among the top 10 in either category, according to Hearst's research, which analyzed book reviews and bans going back to the 2018-2019 school year. The news organization based the review on public information act requests sent to some 600 Texas school districts.

In its analysis, Hearst also found that two-thirds of book reviews during the 2021-2022 school year — or 1,057 — took place after conservative Texas Rep. Matt Krause, demanded districts review books on a list of 850 titles he circulated.

The Fort Worth Republican's 16-page spreadsheet was dominated by material by women, people of color and LGBTQ+ writers. Among the titles were the Pulitzer Prize-winning novel The Confessions of Nat Turner by William Styron and Follow Your Arrow by Jessica Verdi, a young adult book dealing with sexual orientation.

Krause said he was examining whether schools were providing reading material that "might make students feel discomfort, guilt, anguish." He has never confirmed whether he developed the list or received it from a third party, according to multiple news reports.

Critics have lambasted Krause's list as homophobic and racist, while library groups accuse the lawmaker — who's running for Tarrant County district attorney — of trying to score political points by punishing marginalized children and teens.


“It’s a malign campaign to create a moral panic around information young people want and need,” said Deborah Caldwell-Stone, director of American Library Association’s Office for Intellectual Freedom, told Hearst. “It’s resulted in really tragic consequences, not only for young people being denied access to information, but also for people who are made to understand they don’t belong in their communities, at least in the eyes of the individuals who raise these claims.”

The American Library Association challenged bans on 1,597 individuals books across the United States last year, a new record number since it began keeping track 20 years ago.