The judge opted not to apply a $750,000 cap Texas imposes on punitive damages, questioning its constitutionality and saying Jones had “done something horrible” in claiming the shooting was faked. 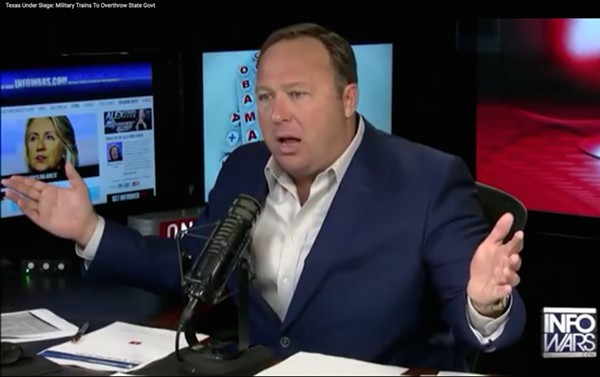 Screen Capture / Info Wars
Alex Jones must pay the full damages in his Sandy Hook case, a judge has ruled.
A Texas district court judge has ruled that Infowars host Alex Jones must pay the parents of a 6-year-old killed in the Sandy Hook shooting the full $49 million in damages in a defamation lawsuit, despite a state law that limits the amount of punitive damages that can be awarded in civil suits.

In August, a jury awarded Scarlett Lewis and Neil Heslin $4.1 million in compensatory damages and $45.2 million in punitive damages against Jones for spreading a conspiracy theory that the shooting was a hoax. Jones’ lawyers were attempting to invoke the state’s cap to slash the amount he owed by more than $40 million. But in a hearing Tuesday, Travis County District Court Judge Maya Guerra Gamble questioned the constitutionality of the law, which could limit the amount of punitive damages in this case to $750,000, the New York Times reported.

“This person and this company have done something horrible,” Guerra Gamble said in the hearing.

The law limiting punitive damages was passed by one of the last Democratic majorities of the Texas Legislature, in 1995, and was the result of a broader shifting sentiment against high jury awards in civil cases. A 2003 law required that punitive damages only be awarded in cases where the jury unanimously agrees.

“The problem that existed at the time was that there were a lot of lawsuits of questionable merit being brought where huge punitive damages were being threatened,” former state Rep. Joe Nixon, who authored the 2003 law, told the Texas Tribune in August, when the jury’s award in the Jones case was announced.

Jones has lost multiple high-dollar lawsuits — totaling nearly $1.5 billion so far — for promoting a conspiracy theory that the 2012 mass shooting in a Connecticut elementary school was staged by crisis actors in order to justify the government taking away people’s guns. Parents have said those lies led to a barrage of harassment and threats in the wake of the shooting, which left 20 children and six adults dead.

Jury hearings to decide damages in another Texas case against Jones, which he lost, will begin in March. His Austin-based media company, Infowars, began bankruptcy proceedings this summer.

Lawyers for Jones told Reuters that the ruling went against “decades of precedent” and that they will appeal it. An attorney for Lewis and Heslin, Mark Bankston, said after the hearing that the decision showed that Jones “cannot run from accountability.”